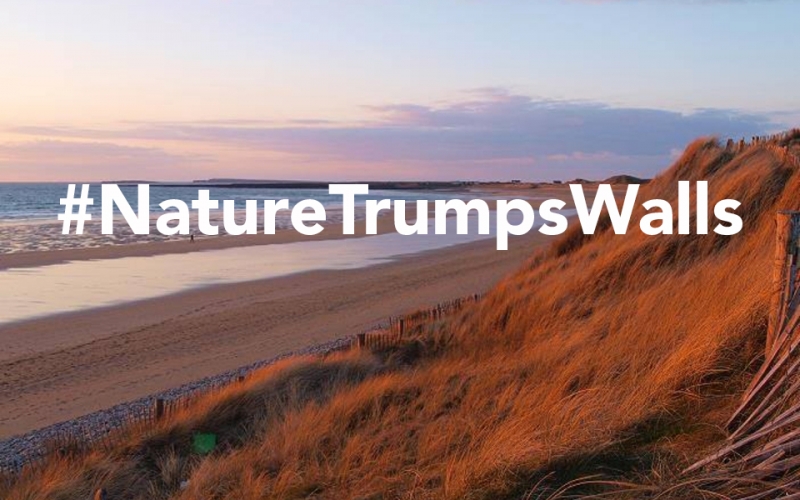 Save The Waves Coalition is proud to announce the launch of #NatureTrumpsWalls, a multi-partner ‘Endangered Wave’ campaign we are leading to defeat a controversial seawall proposal by U.S. Presidential Candidate Donald Trump in Western Ireland. The campaign directs people to sign the online petition, urging Clare County Councilors to reject the seawall proposal at Doughmore Beach that would have severe consequences for their waves and coastal environment.

Donald Trump and his hotel company, Trump International Golf Links (TIGL), seek to build a massively controversial seawall on a public beach to protect his Trump Golf Resort in western Ireland. The proposed wall on Doughmore Beach would run 2.8 kilometers, reach 15 feet tall, and consist of 200,000 tons of rock dumped in a sensitive coastal sand dune system.  Doughmore beach is one of western Irelands most consistent surfing spots and widely popular with a deep community of surfers and beachgoers. Construction of this seawall will destroy the sand dune habitat, restrict public access, negatively impact the quality of the surfing waves, and ultimately result in beach loss.

Trump’s golf course is built along a picturesque sand dune system known as Carrowmore Dunes; a renowned ecological treasure that has been named a ‘Special Area of Conservation’ by the European Union Special Habitats Directive. In all, 31 acres of pristine sand dunes are legally protected and the system provides a unique habitat for the rare prehistoric snail, the vertigo anguistor. The sand dunes play a critically important role for Doughmore Beach as they contribute the sand supply for the wide, popular beach and create the offshore sandbars that make Doughmore Beach a consistently fun surf spot.

Trump sought special permission from the Irish national government for the wall in March but was rejected in April. The local Clare County Council is now the responsible agency deciding the fate of Doughmore Beach. They have reviewed Trump’s permit application and Environmental Impact Statement and have sent a Request for Further Information outlining 51 specific points that they want resolved or clarified. Trump has until December 2016 to submit the requested information. At that point, the Clare County Council will make a decision. All sides expect any council decision to be appealed, a process that will last several months more.

Save The Waves is working alongside prominent Irish and European environmental and surfing groups to defeat Mr. Trump’s proposal. The coalition of organizations includes Surfrider Foundation Europe, Friends of The Irish Environment, Irish Surfing Association, West Coast Surf Club, Friends of The Earth Ireland, and the Irish Seal Sanctuary.

1) Voice your opposition to the decision makers.

2) Put your money where his mouth is.

Donate $1 to support this campaign.

Visit our online store and score a campaign shirt or sticker.