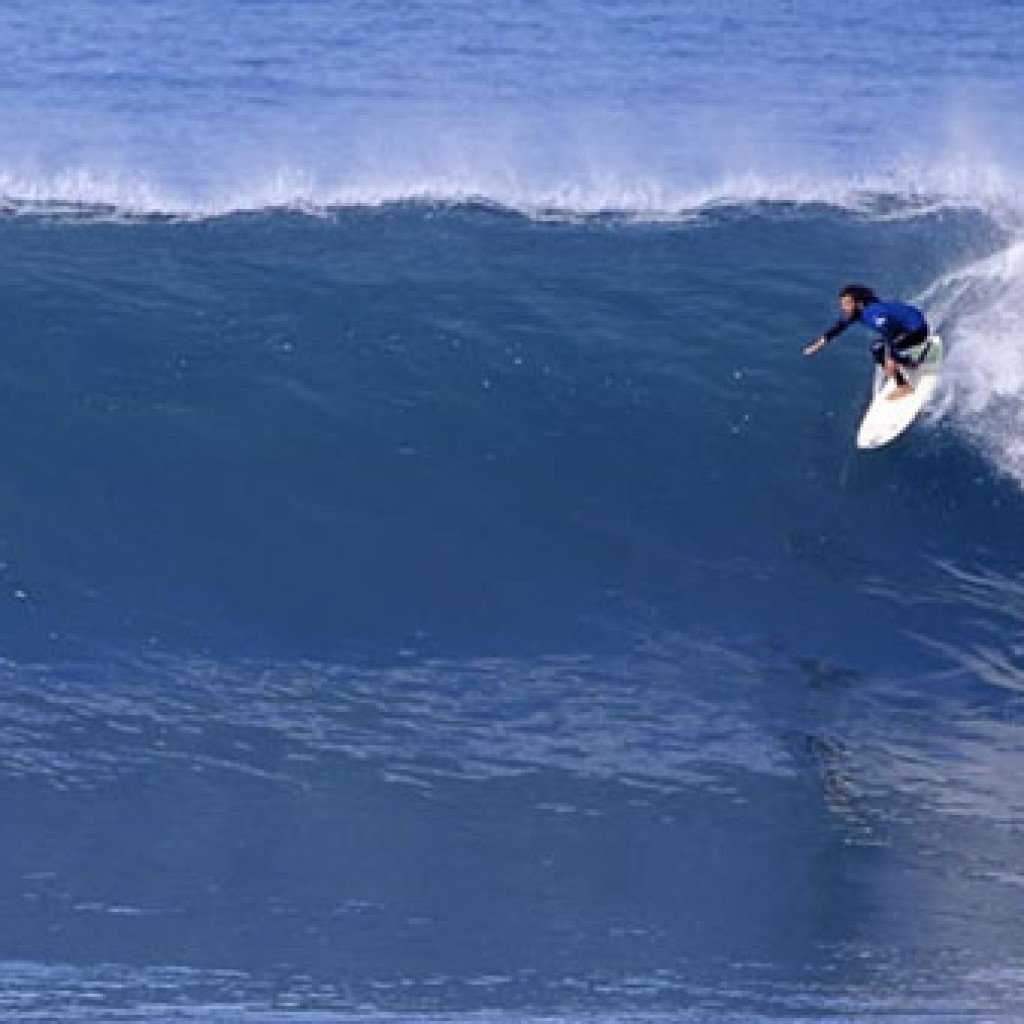 Despite efforts to stop the project, the seawall is built, and the road is paved. Former Madeiran champ Orlando Pereira, who grew up in the village, claims the wall has had a devastating effect on the world-famous line-up. “Before you could surf it on the smaller days for four, maybe five hours around the low tide, but now, you can only surf it for one hour, and then after that the waves break right on the blocks.” Belmiro Mendes, current Madeiran champ and also a local Jardineiro, concurs. “It used to be that whenever the waves were good, everyone went to surf Jardim. Now no one surfs there, except on the days when it is really big and perfect. Instead we go to Ponta Pequena, which is fine, but it’s not as good of a wave as Jardim.”

One thing that everyone agrees on, however, is that the wave is far more dangerous to ride. It was a scary place to surf even before the wall was built, but now it is downright deadly. The seawall has buried about 30 feet of the natural shoreline that once stood as a buffer against the giant Atlantic swells, and also provided a wider and safer zone to wind up in should a surfer get caught inside. Now the waves crash straight into a pile of cement blocks that are significantly closer to the breaking waves. A local surfer, Ruben, lost his board in late October on a big day at the point. The board was blasted into the seawall with such force that not a single piece of it was found afterwards. What that could do to a human body remains to be seen, but we hope that we don’t ever find that out.

Locals of the village are no longer bitterly divided about the benefits or detriments of the seawall. Speak to almost anyone on the subject and they will tell you that it is a blight upon the coastline. Many of the people who supported the seawall originally are now complaining about its size and lack of aesthetic. Jardim do Mar, once touted as the most beautiful village on the island, has been vandalized by a government that wanted to line its own pockets with EU money.

The only bright side to be seen in all of this is that the seawall was poorly designed. “It’s pretty obvious that these engineers have no idea how the ocean works,” said Pedro Bicudo, a scientist from mainland Portugal. Domingos Rodrigues, a professor of geology at the University of Madeira, adds that “the seawall will most likely disintegrate within a decade.” Evidence can already be seen along the point, where the cement blocks are beginning to erode, and this just after only one year of existence. The sheer force of wave energy breaking against the seawall is not to be believed. At high tide, twenty-foot waves break top-to-bottom onto the blocks. “It’s only a matter of time,” says Save The Waves founder Will Henry, “and when the wall falls apart we will argue for its removal and redesign. If they had done it right the first time, we wouldn’t even have to do any of this. It’s an extreme waste of taxpayer money.”

Henry hopes that the Save The Waves film, Lost Jewel of the Atlantic, will produce enough public outcry in Europe to correct the damage that has been done. “The European Commission has a responsibility to enforce its environmental guidelines, which were clearly violated in this instance,” he says. “You simply cannot hand a government a blank check and expect them to follow the rules.”