The Santa Cruz World Surfing Reserve is located on the northern side of Monterey Bay along California’s Central Coast within the protected coastal waters of the Monterey Bay National Marine Sanctuary. The Reserve stretches approximately 7 miles from Natural Bridges State Park on the west end of the City of Santa Cruz eastward along the city and county coast to the Opal Cliffs, just east of Pleasure Point. At least 23 consistent surf breaks are sited along this coast, including the world-class breaks of Steamer Lane and Pleasure Point.

The breaks are rated from “expert” to “beginner” and are used by surfers throughout the year. Surfing contests from pros to clubs to schools are frequent and popular. Beach and surf access is generally good along this coast and most of the beach areas in the Reserve are overseen by the California State Parks, the City of Santa Cruz, or Santa Cruz County.

Santa Cruz has earned the sheltered status of a World Surfing Reserve because of its diverse mix of surf breaks, its pervasive and deep-rooted surf culture, and its thriving but fragile coldwater habitat.

Most surfers who’ve spent any time in Santa Cruz agree that the quality, consistency and aesthetic appeal of its waves make it the best all-around surf town in the continental United States. The reserve’s seven miles of serrated coast features more than a dozen quality spots—from one of the West Coast’s best beginner breaks to a heaving deepwater peak where big-wave legends train. The wide array of points, reefs and beachbreaks suck in Pacific swells from all directions, and the prevailing winds blow favorably year-round.

Santa Cruz’s surf roots date back to 1885, when three Hawaiian princes rode hand-hewn redwood planks in waves breaking near the San Lorenzo Rivermouth—the first documented surf session on the American mainland. A small but devoted core of local surfers kept the sport alive through the first half of the 20th Century, but it wasn’t until surf fever swept from coast to coast in the 1960s that surfing became forever woven into the very fabric of the community. In the decades since, innovative Santa Cruz surfers and manufacturers—from wetsuit designers to surfboard shapers—have influenced wave riders worldwide.

Today, Santa Cruz is home to thousands of surfers, many of whom are devoted to protecting the coast from the ongoing threats of coastal developers and inland polluters. The success of these coastal stewards is evident to anyone who ventures near the coast here on a day when the sun is out, the wind is right, and a solid swell is running. From Natural Bridges to Capitola, the surf zone buzzes with hundreds of shortboarders and longboarders, groms and geezers, heroes and kooks—all vying for sets in the cool, green, kelp-rich sea.

At least 23 consistent surf breaks are sited along this coast, including the world-class breaks of Steamer Lane and Pleasure Point. Most are reef or beach breaks with a few outstanding point breaks, and almost all naturally break right within this zone. Winter is always the best time for surfing consistent waves, and the breaks are rated from “expert” to “beginner,” so surfers of all ages and levels can find a suitable wave in the area.

Santa Cruz proudly claims to be the location of the very first board surfing ever in North America, at the “Rivermouth” break in 1885, as documented in The Santa Cruz Surf. When three visiting Hawaiian princes had surfboards milled out of local redwood and demonstrated board wave riding for the first time, Santa Cruz was immediately established forever as the birthplace of surfing on the continent. The Santa Cruz Surf Club formed in 1936 and helped solidify a strong surf culture that continues today as a key part of the area’s identity, with many local residents embracing surfing as a central part of their lifestyle.

Santa Cruz is a marine protected area located within the Monterey Bay National Marine Sanctuary. The beaches in Santa Cruz are home to many Sea Otters, Seals, Sea Lions and varieties of sea birds, along with the occasional migratory whale and/or Great White Shark. The World Surfing Reserve seeks to address three core threats to the classic coastline; marine debris, water quality, and sealevel rise. The greatest focus has been to address the chronic water quality concerns at Cowell’s Beach – one of the best beginner waves in California. The World Surfing Reserve has convened a group of local stakeholders and experts to collaboratively address the issue together and achieve measurable water quality improvements.

Our commitment to address the issue has led to the formation of the Cowells Working Group in partnership with the City of Santa Cruz. Major improvements have been made and Cowells has since been removed from the ‘Beach Bummer’ list altogether after years of hard work, trial and error, and dedicated scientific research. 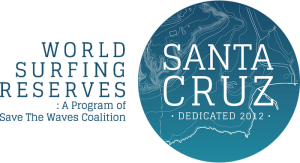 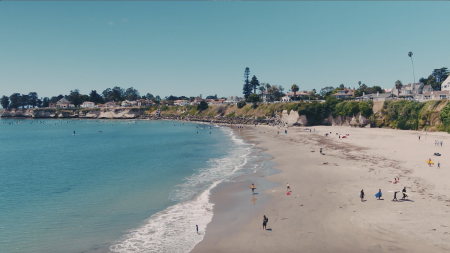 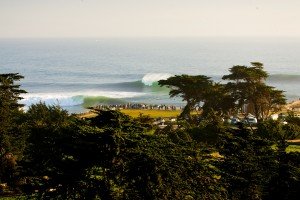 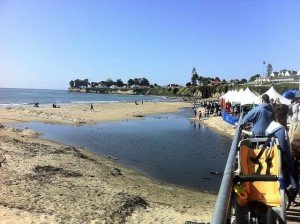 SANTA CRUZ (January 29, 2015)–Several prominent and dedicated environmental groups have come together with the City and County of Santa Cruz to address water quality issues at Cowell’s Beach. Led by Save The Waves Coalition, the recently formed Cowell’s Working Group aims to identify the primary sources of contamination and collaborate on ways to improve