“We were never against the installation of pipes for seawater intake. Our objective was to guide and give the necessary recommendations so that the seawater intake system could be carried out without any environmental risks or danger to the surfers.” 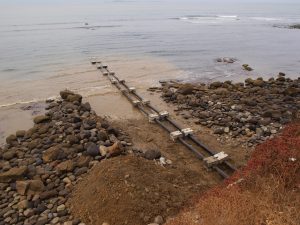 Unannounced and under the cover of night on July 24th, a foreign company secretly installed 105 meters of pipeline into the surf zone at Tres Emes beach. SENFU Mexico, a foreign company that exports live lobster to Asia, installed two seawater intake pipelines with concrete holdings without taking into consideration the impacts on environment and recreation. The location and size of the pipes that SENFU Mexico installed, as well as the aggressive construction system to anchor the pipelines permanently into the reef, are major concerns for the surfing community and, particularly, the World Surfing Reserve.

Since July 2016, the local committee of Bahía de Todos Santos World Surfing Reserve (WSR) has held multiple meetings with representatives of the Ports Administration and SENFU Mexico to explore and propose different alternatives for this project. During these meetings, representatives of the surfing community pointed out that the seawater intake system that SENFU Mexico proposed could affect the nearshore sediment transport as well as the physical-biological dynamics of the reef, and accelerate the erosion processes of the cliff. At that time, the local committee together with other representatives of the surfing community recommended slightly reorienting the angle of the pipelines to a more direction (towards the ‘Bean’s surf break) and to replace the 8″ pipes with a flexible tube of smaller diameter. There are already pipes of this type in the area, and they have been operating for many years without affecting the coastal ecosystem. Our recommendations were accompanied by two technical opinions of two researchers from prominent local universities, CICESE and UABC. 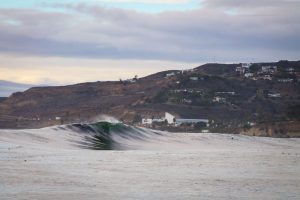 Unfortunately, the work was hastily carried out overnight on July 24th without taking into account our recommendations and the pipelines were installed in an area that could be hazardous to surfers, particularly beginning surfers due to its orientation inside of the main impact zone. The presence of these pipes and concrete structures present a considerable danger for the users, especially during bigger swells due to the strong lateral currents from north to south over the area where the pipelines where installed. The system is a permanent scar on the coastal environment and will likely outlive the presence of the SENFU operation onshore.

There is a great concern on the local and international surfing community in relation to the danger that it represents to the beach users, and the impact that this structure will have in a site that is internationally recognized for holding the first National Surfing Competition, is one of the main surf breaks in Mexico, and is where the State and National Surfing team in Mexico train for world competitions such as the ISA World Junior Surfing Championship.

Save The Waves and the Bahia de Todos Santos WSR remain engaged with the proper authorities and currently reviewing the legal options available to impede the SENFU project with a goal of a project redesign consistent with our vetted recommendations.

PrevPreviousNotes From The Field: Guarda Do Embaú, Brazil: WSR Visit Exceeds All Expectations
NextSTW Presents at IMPAC4 Marine conservation congress in ChileNext
Sign Up For Our Newsletter