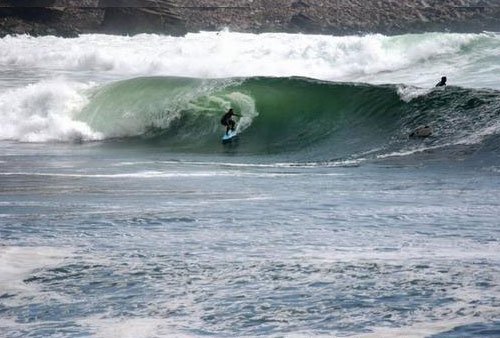 Save The Waves and Peruvian surfers scored a resounding victory in early November 2004 when GREMCO developers agreed to scrap a marina proposal at La Herradura, a perfect left point break near the capitol city of Lima. Save The Waves had been negotiating with the developers for many months, trying to argue that a wave would be far more valuable for nearby real estate than a boat harbor. The harbor was to be built to augment a seven-thousand-home residential development on the land adjacent to the break.

In a conversation in October between GREMCO president Isy Levy Calvo and Save The Waves director Will Henry, Mr. Levy promised to preserve the wave for eternity and recognized the famous point’s “economic value and environmental importance.” He continued by saying that “we are not your average developers, because we have every intention of preserving the features of the natural environment, including the surfing wave.” Save the Waves received a letter in early November, signed by Mr. Levy, promising not to build a marina at La Herradura. (Click here to download the letter.)

A note of caution, however: sometimes developers do not live up to their promises. Save The Waves’ staff and directors, while happy about the result of the campaign, are not letting their guard down, and keep an open dialogue with Peruvian surfers to assure that GREMCO honors its commitment.