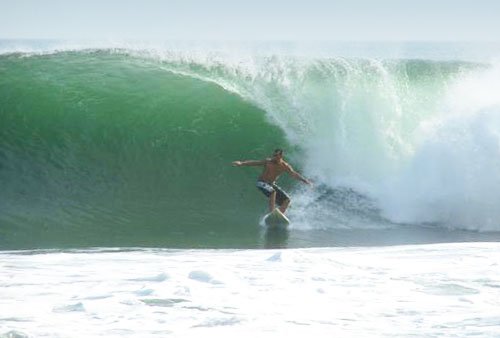 Nicaragua’s head of the Environmental Agency has informed Save The Waves that the break at Rancho Santana will not be harmed. Developers at Pinnacle Construction have abandoned all plans to divert the river Limon, which potentially could have damaged the wave at Playa Santana, in addition to dramatically altering the natural beach. Residents and local surfers aided by Save The Waves were successful in putting enough pressure on the developers and government officials to stop plans to divert the river. Congratulations and thanks to everyone who participated on this campaign!

An epic surf spot at Playa Santana, Nicaragua, is threatened by a real estate development company known as Pinnacle Properties, who plan to alter the Playa Santana River in order to suit the needs of a new multi-home development project. Pinnacle considers the river alteration a “clean-up” to clean the river and beach, and to guarantee continuous beach access to local residents.

Pinnacle also claims that this river “stabilization” will prevent seasonal flooding of the beach, which occurs during the rainy season, and is a naturally occurring phenomenon. Currently, the river’s natural course bends parallel to the beach all the way to the rocks that frame this protected area before leading out into the ocean. The river’s course changes naturally, according to seasonal tide, swell and rain patterns, and is responsible for creating the sandbar at this beach, which frequently produces excellent surfing conditions.

The project, called Seagate, is being built on land that was previously designated as open space by the company that formerly owned the land. Pinnacle purchased the property and subsequently proposed a massive housing development, part of which involves building condominiums on the beach. The project will also involve intensive restructuring of naturally existing river paths, beach shores and sand bars, as well as the introduction of new non-native sediments from erosion of the new river path.

Additionally, should Pinnacle decide to reroute the river, there is still no guarantee that the new condominiums would be safe from flooding. Residents also cite the issue of maintenance, which could involve continuous dredging and any number of other costly tasks to reshape the natural path of the river. The continuous impact of such tasks will adversely affect an abundance of sea life which rely on this river to live, feed and breed. Most affected will be shrimp and snook, which not only spawn in the river before moving out into the ocean, but also supply the local fishing village of Limon with a much needed food source.

The addition of many homes has also raised concerns over water supplies, as the aquifer-fed wells in the area are already strained. Additionally, redirecting the river places many local businesses in jeopardy. The surf based camps, hotels, restaurants and other local business supported in large by surf tourism at Limon and Salinas will be negatively impacted if the Pinnacle developers are allowed to move forward and jeopardize one of the best beach breaks in the area.