October 14, 2011 – Ericeira, Portugal was officially dedicated on Friday as a World Surfing Reserve, and becomes the second WSR overall and the first in Europe.

In a rousing day of events including a sunrise paddle out and a special fisherman blessing at world-famous Ribeira d’Ilhas, Ericeira, Portugal was dedicated as the second World Surfing Reserve. The special designation establishes and celebrates the unique value of the Ericeira surf zone, and aims to enhance efforts to maintain the pristine nature of the area for future generations.

The Ericeira area of Portugal is a treasure for Portuguese and international surfers alike. The dedicated Ericeira surf zone consists of 4 km (2.5 miles) of coastline, containing seven quality surf breaks, including Pedra Branca, Reef, Ribeira d’Ilhas, Cave, Crazy Left, Coxos and São Lourenço.“I fell in love with this area when I first came here in the 1980s,” said Will Henry, founder of Save The Waves Coalition. “This is a magical place, and this designation provides a great conservation tool to better protect it.”

“Ericeira is very special because there are so many great breaks in a very small area,” said Portuguese world tour surfer Tiago Pires, who spoke at the dedication. “On the better days you have waves as good as anywhere in the world. My hope is this reserve results in not just words, but environmental action.”

Portugal has a rich history of ocean exploration as well as a strong fishing culture. The early morning paddle out ceremony by about a hundred surfers was followed by a passionate blessing, performed in colorful freestyle rhyme by well-respected local fisherman Henrique Gramanha. He stated it was local fisherman who were the first surfers in the area, riding their boats on the waves when they came in from fishing.

The Ericeira World Surfing Reserve was officially endorsed by Portuguese president Aníbal Cavaco Silva, as well as acknowledged in the Portuguese National Assembly, recognizing the importance of surf and tourism to Portugal. This is the first formal recognition of the value of the surfing coastline by the national government. Local groups that collaborated on the reserve include the Municipality of Mafra, Association of the Friends of Coxos Bay, Ericeira Surf Club (ESC), and Salvem o Surf, as well as many other organizations and individuals.

World Surfing Reserves is a program co-founded by Save The Waves Coalition, a nonprofit dedicated to preserving and protecting surfing areas throughout the world, in conjunction with National Surfing Reserves Australia. Ericeira is the second of what will become a global network of World Surfing Reserves. Malibu, CA was dedicated in 2010, and approved reserves slated to be dedicated next include Manly Beach, Australia in February 2012 and Santa Cruz, CA in April 2012. 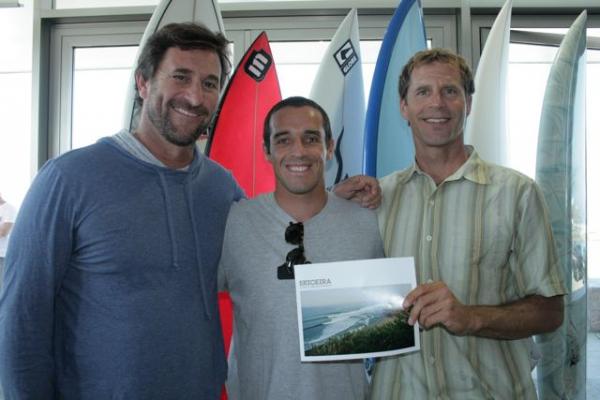 Will Henry, Tiago Pires, and Dean LaTourrette. Photo: Save The Waves 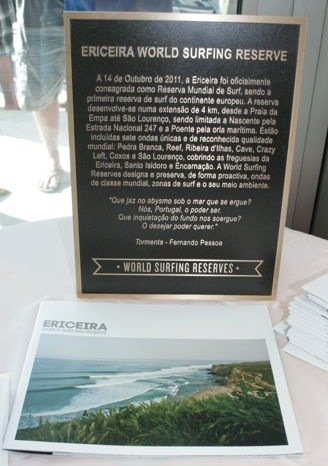 World Surfing Reserve plaque and booklet for the Ericeira WSR. Photo: Save The Waves