Faces of the Reserve: Vicente Yazbek 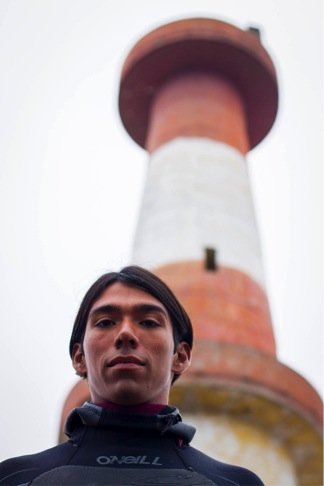 Vicente Yazbek is one local surfer that has dedicated a significant portion of his time to riding big waves.  Every winter, he prepares himself mentally and physically for the boat trip across the bay to one of the original big wave spots in the world, Todos Santos Island.  In recent years, Vicente has made a name for himself in the big wave world and is a local competitor in the Big Wave World Tour of the ASP.  He has also taken an active role within the newly dedicated Bahía de Todos Santos World Surfing Reserve.

Besides surfing big waves, Vicente spends his time running his surfing school “No Limitz”.  Rather than trucking around Ensenada in a van full of soft tops, Vicente utilizes a handmade bike trailer to carry his boards and wetsuits on his way to and from the beach.  He is a local surfer who loves riding waves and is motivated to ensure those same waves are around for future generations.

As access to his local beach, Playa Hermosa, is currently threatened by a government proposal to build a highway and seawall, Vicente is part of a group of people who are organized and prepared to speak out for a change of plans that supports public access.  The first step in that plan working involves working with the local government in hopes that they will rethink their plans and consider the impacts on public access to beaches in Ensenada and the blossoming local surf economy.

Today, a sunny flat day in August, I am in Vicente’s house just up the street from Playa Hermosa where he learned to surf.  His lanky form and quiet demeanor don’t match the image of someone who rides 50 foot waves.  He moves with a slow confidence and deliberate intent. His words are measured with the same precision as his actions in waves of consequence.

Trent (STW): Thanks for joining us for a bit Vicente.

Vicente:  Thanks Trent for having me and thanks to Save the Waves for this opportunity to get together.

Trent:  I want to start out by hearing about your surfing history and how you became attracted to big waves.

Vicente:  I started surfing when I was 16 here at Playa Hermosa.  I started going alone in the winter.  I had a rashguard and a board.

Vicente:  Not yet haha.

Trent:  And Playa Hermosa was much different back then right?

Vicente:  Yeah, no one surfed there and it was a bit of a dangerous spot years ago.  Often times, our stuff would get stolen on the beach.

Trent:  Well its really transformed now with multiple local surf schools popping up, a new boardwalk and access area,  and lots of people learning to surf.

Trent:  How did you become interested in surfing big waves?

Vicente:  It really came from an experience I had at Playa Hermosa 2007.  There was a huge swell and I had never seen waves so big.  I decided to go down with a couple friends and we were all pretty scared.  We studied it for a while, thought it might be impossible, but then got some confidence to give it a try.  My friend and I got out there after a while battling to get out.  He took a wave early and went in and I was out there all alone.  I remember seeing this monster wave come in and I turned around and started paddling.  It was a critical drop and I hit a couple speed bumps, but made it and took the wave all the way in.

Trent:  Did this wave ignite the fire to start surfing waves like Killer’s at Todos Santos?

Vicente:  Yes.  From there, I was like OK, what is my limit in riding big waves?  And I began searching out big waves.

Trent:  When did you start going out to Todos Santos Island?

Vicente:  In the beginning of 2011, I started going there with a couple local friends.  I had an 8’0 which was just enough to start pushing myself, but really started getting into it when Gary Linden donated 5 guns for my second trip out there.  We camped on the island for a few days waiting for the swell to come in.  When the tide dropped that afternoon, the swell showed up as well and it was a big unforgettable day. 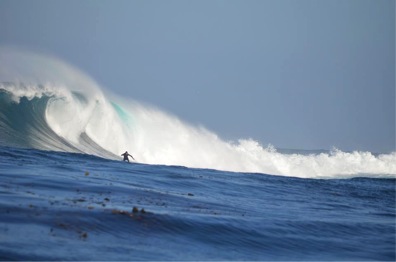 After that trip, I integrated myself more with Gary Linden and his crew and began to go out to the islands pretty much whenever there were waves.  Now, we have formed our own group called “Todos Crew” and are about 15 people from all over who are dedicated to surfing Killer’s when its on.

Trent:  So you and the “Todos Crew” get together for every swell?

Vicente:  Yeah we are all in contact and we start communicating frequently when the swell starts picking up to decide what dates we can make it out to the island.

Trent:  I can imagine it is a good feeling to have a solid group of people when you surf waves at Killer’s.

Trent:  Changing topic a little bit, I wanted to get your opinion and thoughts on coastal development and especially the plans to build a seawall and highway down the beach at your local beach Playa Hermosa.

Vicente:  Apparently, the government has already approved the project.  We are going to a meeting tonight with the local government to let them know what we think about this project. This is a beach that is used by so many people and has become so central to Ensenada.  There are surfers, fishermen, joggers, swimmers, and people who just really enjoy the beach that we have.  This project won’t just impact surfers, but all coastal users.

This project will take place in a beach that is known to be eroding.  The waves are eating away more sand every year.  The government says that this street will not create problems with erosion, but I think they are wrong.  They will have to build a seawall which will impact marine life as well as enhance erosion.

On top of all of this, scientists are saying we may be facing an El Niño this year.  If this is true, all of the studies they have done don’t really mean anything as this is a strong wave when it gets big.  In 2006, the seawall at the port was taken out by a big swell.  Imagine what could happen here at the beach.

Vicente:  Yes, Playa Hermosa is pretty much the only beach in Ensenada where we have free public access.  So now, we are fighting to keep that access to the beach and ensure more areas for public access.

Trent:  Looking at threats like this to surf in Ensenada, what do you think the role should be for a local surfer in confronting these threats?

Vicente:  I think the motivation for a surfer should be to conserve their place and inform.  Many are going to say, why should I get involved when they don’t take into account my interests?  But we have to start somewhere and need to let our opinions be known to the government agencies that manage the coast.

Trent:  I really see that the local surfers here know the value of the waves and seem to be the best ambassadors for the coastline.

Vicente:  Exactly.  Everyday, we seem to have less access to the beach and local surfers are starting to realize how important it is to get involved and to care for our waves.  Every person that enjoys a sport should protect the environment that provides that activity.

Trent:  For our last question, if you could surf any of the waves that are World Surfing Reserves, which would you choose?

Vicente:  Chile, above anywhere else Chile.  I have gotten to know Ramon Navarro and I really respect the values he has taught in respecting a surf spot and caring for it.  The work he has done to live up to the name of a World Surfing Reserve inspires me to do the same here for Bahia Todos Santos.

Trent:  Really Vicente, I see you as the Ramon Navarro of Bahia Todos Santos and I know you will live up to that same standard.  Thanks so much for joining us Vicente.

Vicente:  Thanks for having me Trent.