This article was originally published in the Santa Cruz Sentinel. Written by Ryan Stuart | rstuart@santacruzsentinel.com

Save The Waves Coalition is proud to partner with Kona Brewing Co. on their #CatchACleanWave tour as they promote clean beaches and usage of the Save The Waves App to track coastal threats.

SANTA CRUZ – Kona Brewing stopped in Santa Cruz on Sunday as a part of its Catch a Clean Wave campaign.

The brewing company partnered with a Santa Cruz nonprofit, Save the Waves, surfer Anna Gudauskas and surf photographer Sarah Lee for the West Coast campaign. It started Tuesday in La Push, Washington and will stop in 15 cities along the West Coast before it ends Thursday in San Diego.

The campaign receives its namesake from the brewer’s signature beer, Big Wave. However, the name was altered to spread the message of ocean conservation, one of the brand’s core values.

“We strive to promote natural resource protection,” Associate Brand Manager Brooke Schwab said. “Kona is super passionate about ocean conservation, and we hope everyone feels the same love that we do about the ocean. We’re hoping to inspire people to get out and clean their own local communities.”

The campaign is making an effort to stop in two cities a day, during its 10-day tour. In each city, Gudauskas will ride a few waves as Lee photographs – if the surf allows – before they lead the way on a beach cleanup in that city.

It’s the kind of road trip two friends dream about, Gudauskas said of hitting the best surf spots the west coast has to offer. It has given Gudauskas and Lee an opportunity to scope out surf spots they would like to return to in the future.

As surfers, beach cleanups come with the territory. Surfers feel a deep connection to the water, and they like to give back to their beaches and ocean. They are “stewards of the ocean” as Shaun Burns from Save the Waves said.

Picking trash off the beach is a common task for surfers after a session on the water, according to Gudauskas. She makes sure to always leave the beach better than she found it by grabbing a few pieces of trash as she leaves. Normally visiting new places is about taking new experiences in, but this trip is about giving back to the communities they visit, she added.

Not only is it good for the environment, but it can only be good for a surfer’s karma out on the water, Burns said. He views every piece of trash he picks up as a set of waves on the water, so he might as well pick up as much as possible so he can get the best waves on his next session.

“A lot of that is the way surfers are raised,” Gudauskas said. “We care a lot about the ocean because it gives us so much. A lot of surfers innately understand that you need to take trash off the beach it you don’t want it to get washed out to sea.”

While it’s common for surfers to grab some trash on the way off the beach, the Catch a Clean Wave campaign has served as an opportunity to dedicate more time to giving back to the ocean. The campaign has also focused on raising awareness about keeping beaches and oceans clean, which made Save the Waves the perfect partner.

“It’s awesome Kona can think of us as an environmental group to help with their beach cleanups,” Burns said. “We’re proud to be the organization to help companies come together and help out with environmental awareness.”

The Santa Cruz nonprofit operates on a global scale to bring communities together to foster healthier beaches. It has designated 10 World Surfing Reserves across the globe, Santa Cruz being one.

Communities apply for the designation and an independent team of surfers, scientists and business owners decide who gets the designation. Each year, one city is awarded that designation. From there, they form coalitions that work to keep beaches clean. 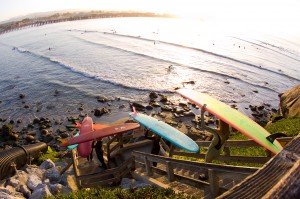 That is how Cowell’s Beach got off the Heal the Bay Beach Bummer’s list two years ago. Now, the community is continuing the effort to keep the beach off the list for good.

As part of the campaign, Save the Waves set up a tent at the beach. People interested in helping then came, got a bucket and hunted for trash. When they return with a full bucket, the Save the Waves team sorts it to be disposed of properly.

“Obviously we’re going to pick up the trash today, but I’m hoping since it was more of a social media event, that people would see it even if they’re not form the local area and think twice when they go out in nature about packing their trash and leaving no trace,” Anne Donahoe, a Santa Cruz local and blogger for The Californian, said.

Collection buckets returned were filled with different types of trash. Plastic bottles, beanies, sand toys, soda cans, condoms and even discarded dog poop bags have been collected on the beach. However, cigarette butts are the most abundant trash found on the beach, according to Burns, which is an issue another Santa Cruz-based project – the Cigarette Surfboard – has highlighted.

The campaign has six stops left before it comes to a close in San Diego. Kona Brewing, Gudauskas and Lee will continue their tour down the Pacific Coast Highway to surf the best waves and keep the ocean clean.

“Our goal traveling through the oceans and beaches that give us so much joy is to leave the beach better than you found it. It’s just as simple as that,” Lee said. “It’s been a fun challenge to show that visually.”

PrevPreviousReducing Ocean Pollution Together: Introducing “The Plastic Wave” by Ethan Estess
NextSave Katoku, one of the last intact surf breaks and beaches in JapanNext
Sign Up For Our Newsletter