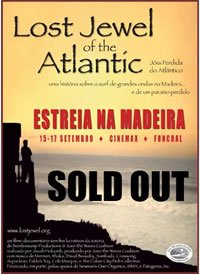 Lost Jewel of the Atlantic, a documentary film directed by Jacob Holcomb and based on the destruction of surf spots on the island of Madeira, made its first debut on this small Atlantic isle, despite threats by the government to “criminally prosecute” the producers. Save the Waves decided to screen the film anyway, beginning with a sneak preview for members of the government and press. Every minister of Parliament was invited to the preview, along with the President of Madeira, Alberto João Jardim.

In the days leading up to the film, articles appeared in almost every major newspaper on the island, and executive director Will Henry was interviewed on RTP’s nine o’clock news. The day before the preview, Henry stated in an interview with Diario de Noticias, the island’s most widely distributed newspaper, that if the ruling party of PSD refused to show up, it would be “a sign of cowardice”. He added, “If they simply would go and see the film, they might actually learn something about the people they govern.” Despite this challenge, PSD boycotted the preview.

Nonetheless the event was well attended, and afterwards many of the viewers expressed outrage at the government’s negligent actions, and found the film extremely educational about the rarity and beauty of Madeira’s surf. The film was available for public viewing for three days, with three sessions per day, and more than half of the sessions were completely sold out. Save the Waves will screen the film again on September 24, to accommodate increasing demands by the public for more showings.

The ruling party responded by holding a press conference on Saturday, September 16, during which Minister Manuel Santos Costa accused the film of telling a “malicious lie”. He also claimed that “Jardim do Mar not only has the same conditions as before the seawall, but those conditions were even improved.”

An article in Diario de Noticias appeared the following day, written by Jorge Freitas Sousa, which challenged these statements by the Minister. “I do not believe that you, Mr. Minister, will ever balance on top of a surfboard, and your contribution will make Madeira an international anecdote.” This entire incident is evidence of the stubbornness and arrogant attitudes of the regional government, and the fact that they have always had much to learn from experts in the field.

President Jardim has in past years accused surfers as being “barefoot tourists”, and has refused every request for a meeting with Save the Waves or the local surf clubs on the island since the beginning of the construction projects. The argument made all along by Save the Waves Coalition has been that, not only would the coastal projects harm the waves, the future economy would also suffer as it depends heavily on tourism. Since the completion of the works, tourism is down significantly on the island. Furthermore, many residents of Jardim do Mar, the village that once had the best wave on the island, have expressed deep dissatisfaction with an oversized seawall and promenade that was built along the shore in the village, claiming it has destroyed the natural appeal of their coast and caused a severe lapse in tourism income.