Manly and Freshwater beaches and their surrounding surf breaks encapsulate all that is required for a World Surfing Reserve (WSR) – consistent quality surf, rich surfing history, strong community support and a magnificent coastal environment. First and foremost is the surf spread along 4 km of beach and in places rocky shore, it provides regular consistent beach breaks together with reef and point breaks that can are surfed in bigger swell. There are always waves at Manly-Freshwater and always surfers from dawn to dusk out in the surf. 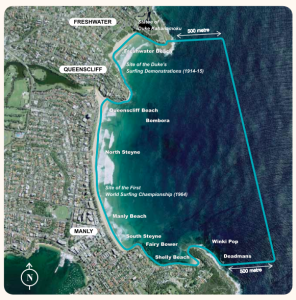 On any day the number of people swimming, surfing or just walking the boardwalk all attest to a strong bond between the Manly and Freshwater communities and their beloved surf.