A few weeks back I boarded a plane to Chile, to make important progress on our Lobos Por Siempre project in Punta de Lobos, Chile.. The objective of my trip was to finalize legal documents detailing our relationship with Chilean partners, deepen collaboration with the newly created Chilean foundation ‘Fundacion Punta de Lobos’, and present project updates to the local community. I spent the majority of the flight flipping through the numerous documents we’ve accumulated over the last two years so I could hit the ground running when I landed in Santiago.

Don’t get me wrong; Santiago, Chile is a perfectly nice city. Situated at over 1,000 feet in a valley flanked by the towering Andes, it is a bustling cosmopolitan city bursting at the seams with beautiful women in designer clothes and hip cafés. However on my recent trip to Chile in May, I could not escape the city fast enough to get to the waves. My board bag was stuffed in the corner of my hotel room and the surf report showed a fading southwest swell that would lose its pulse by the time I finally arrived at Punta de Lobos later in the week. Luckily, I was busy in meetings with the Fundación Punta de Lobos to advance the project, which helped keep me sane.

Just over a year has passed since Save The Waves Coalition, Patagonia, and Patagonia Ambassador, Ramon Navarro, teamed up to launch the Lobos Por Siempre campaign in a joint effort to protect Ramon’s home break, Punta de Lobos in Chile. Punta de Lobos is a remarkably beautiful place; coastal bluffs dotted with endemic cacti, swirling tide pools rich with kelp and shellfish, and a long, sweeping left hand point break that can handle swells from 3 – 30 feet.

Ramon reached out to Save The Waves a few years ago alerting us to the threat of coastal development along this sparsely populated stretch of coast. The entire point was in private hands and rumors of four-story condominiums, underground parking, and restricted coastal access were gaining legitimacy. In partnership with Patagonia we launched the Lobos Por Siempre campaign to save the point from new development, guarantee public access to the coastline, protect traditional fishing rights, and preserve the biodiversity of Punta de Lobos. 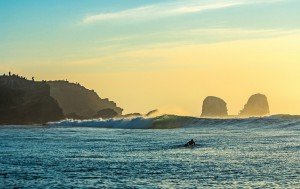 The conservation strategy in this campaign is to acquire the most sensitive and iconic properties at Punta de Lobos, place them under conservation easements to permanently restrict development while guaranteeing public access, and restoration of the native flora along the bluffs. The focus of the Lobos Por Siempre campaign has been fundraising for the acquisitions and building the partnerships needed for ownership and long-term management.

Over the course of the past year, we have made significant strides towards our goal of permanent and legal protection of Punta de Lobos and have hit some important milestones:

After four productive days in Santiago I was ready to reconnect with Punta de Lobos and our friends in the community of Pichilemu. After arriving into town and getting my first surf under my belt, I was able to share the recent project advances with the Surf Club at Punta de Lobos. Naturally they are very interested in the future of their beloved point break and it was great to outline what steps we are taking with Patagonia and Fundación Punta de Lobos to permanently protect and preserve their home break.
Chatting with Surf Club President and local legend, Diego Medina, with the sun sinking behind the glassy horizon, I was pretty happy to be out of the city and back to this magical place.

PrevPreviousBird Screening at Wharf and Increased Science Hope to Take Cowell’s off California’s Top Spot
NextGreg Long, J Nichols and G. Love bring down the house at the 10th Anniversary of Life is Wave.Next
Sign Up For Our Newsletter