If I asked you to define a tropical surfing paradise, you might come up with a description of the Maldives, which consists of 26 low-lying atolls, strung out in the Indian Ocean southwest of India. There are literally dozens of world-class surf spots, mostly situated on the reef passes around the atolls. And the setups are perfectly suited to the consistent, two-to-eight-foot swells that arrive year round from the Southern Ocean. Wind conditions are predictable and governed by the monsoons, and the crystal-clear water never drops below about 26 degrees C.

As well as a surfing paradise, the Maldives has become a paradisiacal holiday destination in general. High-end resorts are springing up everywhere; multinational companies are buying entire islands and making them exclusive for their guests only.

Some of these resorts are expensive, luxury surf camps, built overlooking a surf spot and catering for surfers who like everything laid on: accommodation, food, beer and exclusive access to a world-class wave. The people of the Maldives (who are much poorer) work in these resorts and depend on tourism for their income.

But there is a problem. A lot of the islands where resorts are being built are being expanded artificially, with concrete structures being extended from the coast out into the sea. This goes by the wonderfully disingenuous term ‘land reclamation’. (In reality, it is ‘claiming’ not ‘reclaiming’; that is, you come along, claim a part of the ocean, turning it into land, and then declare that it belongs to you).

Anyway, experience has shown that ‘land reclamation’ in the Maldives tends to be poorly planned. It almost never considers the future effects on the physical and biological processes of the delicate atoll system. Apart from that, it can result in the degradation of a surf spot, because the concrete structures, or other concrete structures to protect them, encroach on the breaking area and interfere with the waves.

If most of the people staying in the resort are surfers, this can end up being a big foot-shooter for the resort owners. Destroying the very attraction that brought the tourists there in the first place, is obviously not good business.

One place where this has happened is a surf spot called Chickens. Chickens is a lefthander that breaks off a small island called Kuda Villigili in the northeast of the North Malé Atoll. It is one of the most famous waves in the Maldives. It works between around two and eight feet, contains tube sections and is one of the longest waves in the Maldives. It is not a difficult wave to surf, almost always breaks in the same place and works at all stages of the tide.

In summary, Chickens is a quality wave that can be enjoyed by many surfers with different skill levels and surfing styles. Therefore, even if you look at it from the point of view of a resort owner who simply wants to attract tourists to the island, it should be a ‘resource’ worth protecting.

The ‘land reclamation’ I was just talking about has recently taken place on a massive scale in Kuda Villigili island. To build the resort, the developers have expanded the island to almost twice its original size (see photos). And in the process, they have built a seawall in front of the wave to protect part of the development.

The original natural coastline is made up of broken beach rock and coral boulders, with loose gravel and coral sand. The shoreline has a low gradient and is not fixed in place, which means it acts as a natural wave energy absorber. No surprises there, as coastlines evolved over millions of years to function perfectly in their natural environments. That is, until we came along.

The seawall that has been built in front of Chickens consists of a row of large rocks fixed to the ground. Engineers call it a ‘revetment’ or sometimes a ‘rubble-mound breakwater’. The rocks form an artificial shoreline that looks a bit like a natural high-tide ridge. However, it is steeper than the original shoreline, with hardly any gaps in between the rocks and no way for them to move. Therefore, there is almost nothing to absorb the wave energy. Result: severe backwash.

We all know that backwash can seriously affect a wave for surfing. But backwash also has other serious implications, especially on such a fragile physical environment as a low-lying coral atoll. It can lead to knock-on effects that threaten the very structure of the island.

By transporting extra material offshore, the delicate sediment budget is upset, which can quickly lead to erosion. The island might not just lose a wave; it might also lose its beaches. So there is reason enough to remove that structure, and put something else in there that doesn’t cause backwash.

The Maldivian government know about the Chickens problem. And the people who own the resort – a tourist company based in India – are also aware of it. The company is not primarily surf-based, but a large proportion of their clientele will be surfers hoping to score epic Chickens. If they haven’t realised this already, they will do soon. Therefore, it is in their interest to do something about the backwash. 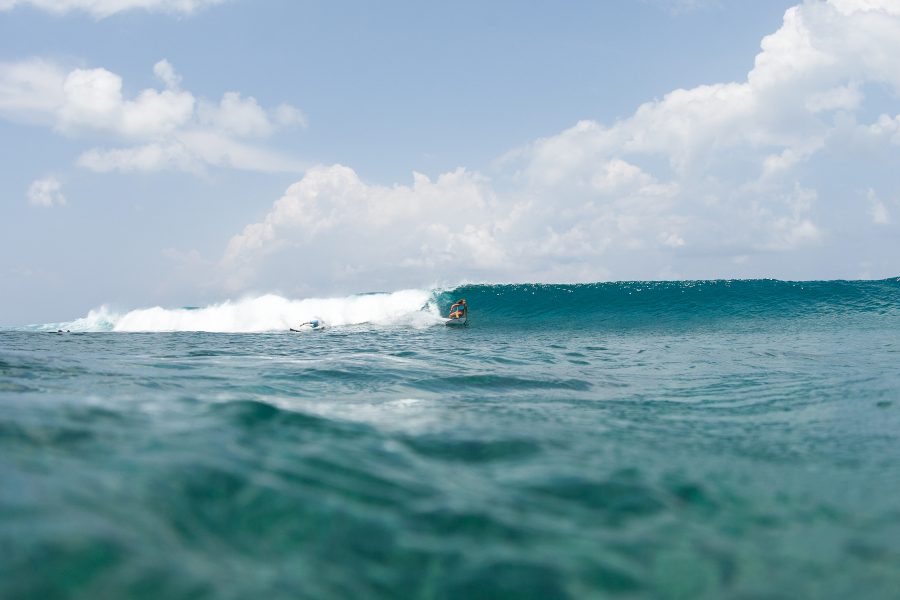 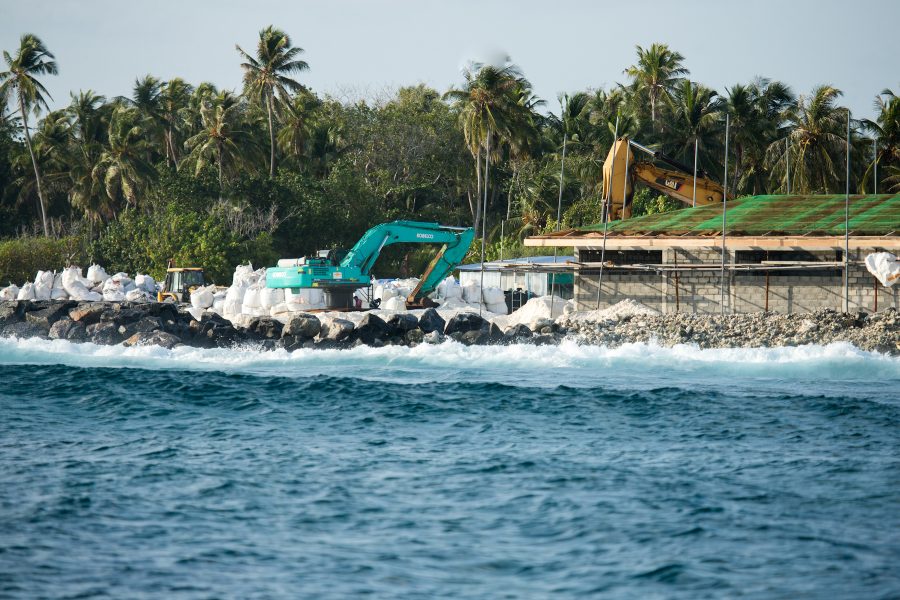 To do something about the backwash, that wall needs to be replaced by something that absorbs the wave energy, not reflects it. Of course, the ideal solution would be to remove the buildings themselves and put them further inland. But that is not going to happen. You might as well suggest turning back the clock and redesigning the whole thing from scratch.

The most practical solution is to remove the wall and replace it with a different structure. It needs to be something that continues to protect those buildings, and, at the same time, doesn’t affect the wave. In other words, a more absorptive structure, one that mimics as closely as possible the original shoreline.

This needs to be designed properly, starting with data collection, followed by computer simulations and then built by people who understand how it works. People who appreciate that we can’t compete with Nature; we can’t design something in a couple of months and expect it to work better than something that took millions of years to evolve.

At the time of writing (early 2021) things look quite promising. The Maldivian government are definitely on our side. However, the resort company still needs a bit of extra convincing. They need to be convinced that doing nothing and letting Chickens continue with that nasty backwash will be a big foot-shooter for them.

Save the Waves has launched a campaign (HERE). The campaign is designed to raise public awareness globally, and to show the politicians and developers how much a surf break means to surfers around the world. Raising public awareness about this issue is vital.

If Chickens is saved, it will be the first time in the Maldives that the value of a surfing wave will have been recognised, even if only for the pragmatic reason that it brings money into the economy. If, on the other hand, Chickens isn’t saved, it will still go down in history as an unfortunate case that could have so easily been avoided. So please sign the petition (HERE) and put it on your social media.

The other problem that needs to be addressed is not quite so clear-cut. It is the fact that Chickens is not an ‘open-access’ wave. In other words, people who stay in the resort have exclusive rights to surf there, and other people are prohibited. This is great if you are a paying client, and it is a great selling point for the resort owners. But not so good for the Maldivian surfers. To me – although this is just my personal opinion – it just doesn’t seem right in a moral sense.

In summary, if there is no avoiding turning the entire Maldives island chain into a giant luxury tourist resort, then it is in everyone’s interest to do it properly right from the beginning. A proper balance has to be made between the existing natural elements and the artificial ones put there by humans, with the priority always being the natural ones.

According to Ed Atkin, scientific adviser to Save the Waves and the New Zealand based Surfbreak Protection Society: “In New Zealand, the idea of sustainable development with economic benefits being constrained by environmental objectives has been in effect since 1991. For somewhere such as the Maldives, where the ecosystem is so fragile, land and space are incredibly limited, and the economy is largely based on environment-focused tourism, there would likely be long-term gains by weighing environmental benefits above economic ones.

“The lure of the Maldives is the natural setting, a significant part of which includes high-quality surfing waves. Through a detailed understanding of the environment, the development of these islands can be done in a way that leverages and maintains the natural processes, and not at the expense of existing resources.”

PrevPreviousSave The Waves and partners launch international campaign to protect the Maldives
NextNew Surfonomics Study for Lobitos, Peru ReleasedNext
Sign Up For Our Newsletter