The Peruvian Ministry of Transportation and Communications has accepted a proposal from the Spanish developers Accióna for a series of jetty projects in an attempt to address the persistent coastal erosion in Huanchaco and neighboring municipalities. 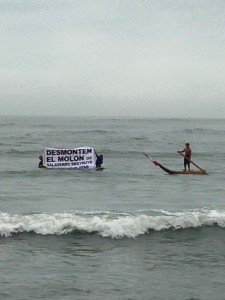 Last week the community of Huanchaco sent a clear message to Peruvian authorities that they oppose the construction of a jetty along their coastline within the World Surfing Reserve. Ironically, the coastal erosion that these jetties are aimed at stemming is caused by the Salaverry Port project, which was built in the 1970’s roughly 15 miles to the south of Huanchaco. The Salaverry Port project has cut off the necessary south to north longshore transport of sand that naturally replenishes Huanchaco and other beaches.

Standing hand-in-hand along the beaches of Huanchaco the Association of Traditional Fishermen and local surfers from the World Surfing Reserve joined forces to denounce the jetty project in Huanchaco and to disassemble the Salaverry breakwater. The fishermen then took the fight to the regional government as they marched to the central plaza of Trujillo and publicly protested the project.

Save The Waves is coordinating with the Huanchaco World Surfing Reserve to ensure that their coastline is not compromised by this development.