Martha Lavinia is a world class beach break on King Island in Bass Strait. Known for it’s perfect ‘A-frame’ waves formed by swell wrapping around both sides of the island, Tassal has been granted a permit to explore options for a salmon farm operation immediately east of Martha Lavinia Beach. The permit grants exploratory access to an area about 124 square kilometres off Nine Mile Beach, extending up to five and a half kilometres off the coast. The announcement comes after the Government slated the North West Coast and King Island as potential fish farm locations in August.

Tasmania’s salmon industry is the largest fisheries sector in Australia. Valued at $625.9 million, salmon farming makes a substantial contribution to Tasmania’s economy. Starting with a commercial harvest of just 53 tonnes in 1986, the industry now produces 40,000 tonnes a year and has plans to double production by 2030. Unfortunately, regulation of Tasmania’s salmon industry has not kept pace with its rapid expansion. Tasmania’s salmon farm regulations are twenty years old, leaving them twenty years behind global best practice. Internationally, the mounting evidence of damage done to coastal environments by inshore salmon farming is very concerning. Scientific research shows that sheltered bays and harbours cannot support the amount of pollution introduced by intensive farming, or provide optimal conditions for fish health and growth. 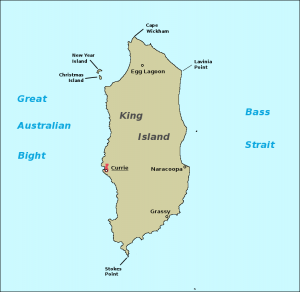 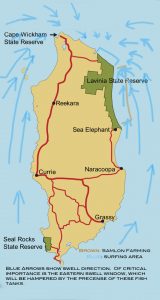 There is consensus in scientific literature: intensive fish farming in open pens damages the marine environment, with the level of damage dependent on the intensity of production and the sites capacity to assimilate pollution. Some level of damage is inevitable in open-pen systems, because they provide no way of capturing the tonnes of waste produced by farming – the waste is simply released into the ocean. Waste produced by salmon farming includes uneaten fish food, fish faeces, urine and organic matter from net-cleaning. The major components of solid and dissolved waste are various forms of carbon, nitrogen and phosphorous. This waste settles on the seabed and enters the water column. A build-up of organic matter in sediments on the seabed produces major changes in sediment chemistry. Changes typically associated with a severe build-up of organic matter are a reduction in sediment oxygen levels and the subsequent production and release of methane and toxic hydrogen sulphide. Low dissolved oxygen concentrations can harm benthic invertebrates, fish and other organisms. This can lead to anoxic and hypoxic events, where sediment flora and fauna do not have sufficient oxygen to survive. In the water column, soluble nutrients can alter the species composition and density of phytoplankton, increasing the risk of toxic algal blooms.

Beyond the documented risk that fish farming has on marine ecosystems, locals are concerned that a fish farming operation of this scale immediately offshore could interfere with the swells that wrap into Marha Livinia, disturbing the pristine surfing conditions that grace the local and, sometimes very lucky, visiting surfers.