Malibu is a right hand cobblestone point break, known as one of the world’s original perfect waves. It’s consistent south swell magnet, Malibu breaks well in the spring, summer, and fall. On the biggest days the surf can reach 8′ to double overhead and connect for 100 yards or more from Second Point through to Malibu Pier. 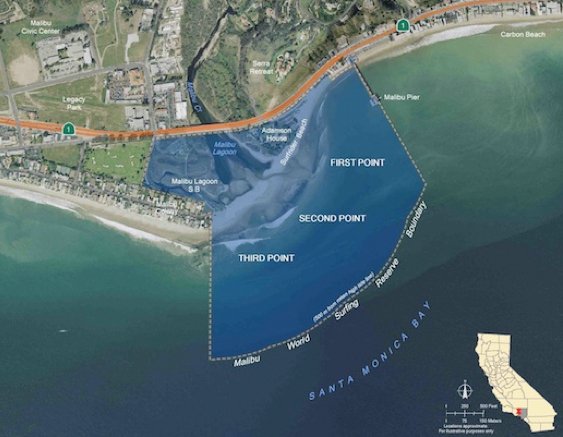 Two generations of surfers used Malibu as the definition and focus for California surf culture. Surf legends recognizable by last name: Dora, Carson, Weber, and Velzy made Malibu home, and it was arguably the epicenter of the 50’s and 60’s surf culture. It also served as the setting for a girl named Gidget, who brought more notoriety to surfing than any other female in sports history.

Malibu is a rivermouth point break, connected through a lagoon to Malibu Creek, part of a 100+ sq mi watershed extending into San Fernando Valley. Nearby is the Santa Monica Mountains National Recreation Area. Malibu’s dry brush and steep clay slopes make it susceptible to fires, floods, and mudslides. The watershed that feeds the cobblestone break has been besieged over the years by man-made issues, including river damning, water pollution, and lagoon and inlet manipulation.

Malibu was selected as the first World Surfing Reserve because of the stellar quality of its waves, the seminal role it played in the birth of modern surf culture, the rich biological characteristics of its besieged inland wetlands, and the protective galaxy of locals caught in its gravitational field.

The waves at Malibu represent California pointbreak surf at its finest. For decades, dating back to the 1920s, surfers worldwide regarded its long, peeling right hand walls as the very definition of a “perfect” wave. Soon after the sport of kings puddle-jumped from Hawaii to the West Coast, Malibu became ground zero for California’s growing surf culture. “Malibu is the exact spot on earth where ancient surfing became modern surfing,” Paul Gross once wrote. Gidget, the book and movie that helped lure hordes of newcomers to the sport, was set here. The shapers who designed the first high-performance surfboards (Bob Simmons, Joe Quigg, and Matt Kevlin, among others) conceived their revolutionary prototypes here. Miki Dora, the mid-century icon who still stands as surfing’s preeminent anti-establishment hero, learned to walk the nose here, and other legends like Lance Carson, Dewey Weber and Dale Velzy made Malibu their home.

Surfrider Beach at Malibu and the surrounding area is part of a complex ecosystem that includes the Malibu Creek watershed and Malibu Lagoon—the sediment from which created the point that sculpts Malibu’s machine-like waves. The entire area—from the surfline to the shore to the lagoon to the creek’s inland reaches—is rich in flora and fauna. Dolphins play in the surf. Pickleweed blossoms in the brackish wetlands. Black-necked stilts feed in the mudflats. Endangered southern steelhead spawn in the lagoon. Chaparral and sage scrub thrive upstream.

The community surrounding Malibu and the surf break is active and engaged, comprised of recreational and professional surfers, surf clubs, environmental groups, and other community organizations. The break is a source of pride and identity for locals, and the beach there serves as a de facto town hall for residents and visitors alike.