Less than a day away from our finale screening at the Guild Hall in East Hampton, Long Island, NY, the Save The Waves Film Festival road crew find themselves sunburned, salty, and in a state of surfed-out bliss from an Atlantic Ocean that has recently awakened from its summer doldrums and roared to life thanks to a string of tropical storms.

After the world premier screening in the World Surfing Reserve of Ericeira, Portugal, the Save The Waves Film Festival, presented by Pacifico and GoPro, embarked on its first east coast tour in mid-August, beginning at Wave Riding Vehicles in Virginia Beach, VA – home of the East Coast Surfing Championships and hometown of film festival director Trey Highton.  “It meant a lot to me to be able to bring the film festival home to share the mission of Save The Waves with my family and friends on the right coast.  Although Save The Waves has been around since 2001, most of our environmental programs are active in amazing but far-flung international surf destinations.  This east coast tour is a great way to build awareness about STW’s mission to protect our coastal resources and surfing heritage with new audiences up and down the eastern seaboard.” 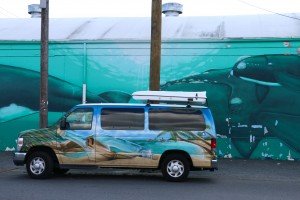 Save The Waves has been fortunate to have strong support from local surf shops like Wave Riding Vehicles in Virginia Beach, VA and Farias Surf & Sport in Long Beach Island, NJ along the way.  These shops are cornerstones of their respective surf communities and generously donated venue space and manpower to host film festival screenings.  “I think the film fest is a great opportunity to bring a lot of issues to the forefront that surfers face around the world. There are a lot of similar issues that all coastal communities face.  And any time you can educate people, I want to take advantage of that,” stated Brian Farias, owner of Farias Surf & Sport.

Enthusiasm from the east coast crowds has been unsurpassed, and we’re expecting another strong turnout for our finale screening this Friday night in East Hampton.  If you’re in the area, come out for a good time and to support a great cause.  All funds raised at the Save The Waves Film Festival go directly to our environmental programs, including World Surfing Reserves and Endangered Waves.

The Save The Waves Film Festival is strongly supported by Parley for the Oceans, Patagonia, Peak Design, Klean Kanteen, Clif Bar, The Inertia, Escape Campervans, Suerte Tequila, Tito’s Vodka, The Fond Group, and more.  Many thanks to our sponsor partners and all of the film fest attendees for supporting the environmental mission of Save The Waves.