The last beer has been drank, the last film screened, and the 7th annual Save The Waves Film Festival presented by Pacifico has officially wrapped up its US leg of the 2015 tour. Attracting over 1,300 attendees across California and Texas, the Save The Waves Film Fest united surf fans in San Diego, Dana Point, Austin, Santa Cruz, and San Francisco around amazing surfing, environmental stories and good, old-fashioned fun. 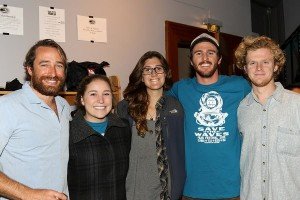 “We were really amazed by the turnout and reception at each of the tour stops” said Trey Highton, Save The Waves Film Festival Director. “People were really inspired by the films and the feedback we received was overwhelmingly positive. We are definitely coming back next year.”

This year’s tour featured films from an array of international filmmakers like Chris Malloy, Jensen Young Sik, Kyle Buthman, and Jason Baffa arranged around a common theme of respect and care for our oceans and environment, while featuring live music from amazing acts such as The Mattson 2. To further the reduce the footprint of the events we proudly eliminated all single-use plastics this year and encouraged all attendees to bring their own reusable cups or purchase a Save The Waves stainless steel pint cup at the events. 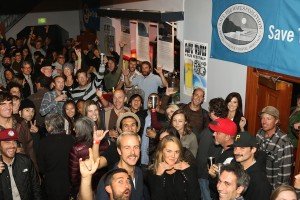 The Victoria Theatre in San Francisco, where it all began, is always a packed house. Photo: Nikki Brooks

We will carry this momentum from the tour into upcoming Latin American screenings in Ensenada, Mexico and Chile this December. “This gives us a chance to bring these great films and message to the communities where we work”, said Save The Waves Executive Director Nik Strong-Cvetich.

If you missed the tour, there is still a chance to see the films in your hometown—email films@savethewaves.org for more information about licensing your own screening of the 2015 Save The Waves Film Festival at the time and place of your choosing! We are stoked to offer this opportunity to other oceanic non-profits, surf clubs, etc, to help them raise funds for their own local environmental projects. The licensing event window will run from January – May 2016. Please stay tuned for more big changes from the Save The Waves Film Festival, including a growing tour that will feature a dedicated east coast tour for the 2016 season.

Thanks to everyone who attended the 2015 Save The Waves Film Fest, making it the best tour yet, and a very special thank you to our amazing sponsors for making the tour possible: Pacifico, Patagonia, Clif Bar, The Inertia, Volcom, Tito’s Vodka, Suerte Tequila, Escape Campervans, Hobie Surfboards, and more!