Save The Waves Coalition commissioned one of the first expenditure analysis studies on surfing, researching the economic impact that the surf break in Mundaka, Spain has on the local economy through surf tourism. Surfonomics partners Oregon State University’s College of Oceanic and Atmospheric Sciences, and Autonoma University of Madrid, discovered that surf tourism contributes a range of $1.1 to $4.5 million US dollars annually to the local economy. 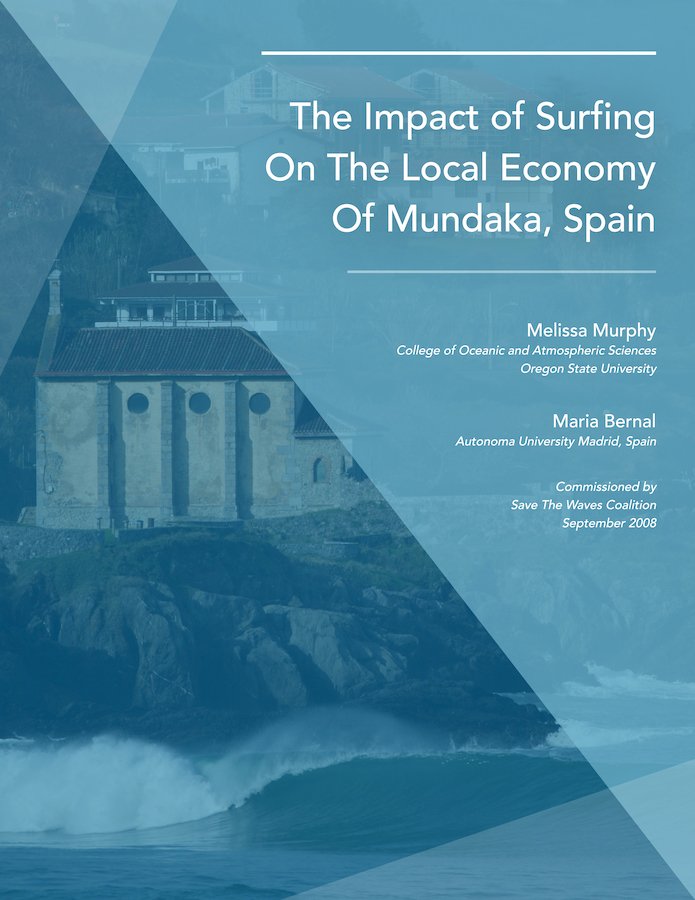 Coastal development is often seen as the answer to many governments’ economic development needs, especially in the areas of tourism and transit. Many of the world’s governments view their coastlines as untapped resources, last bastions of economic possibilities; as a result, we have seen such projects as motel and resort development, ocean attractions, new airports, new roads, artificial reef construction, and real estate investment take place in ever more remote coastal destinations. While it is the intention of these development projects to encourage new economic markets and growth, existing markets like surfing can be overshadowed and even destroyed in the process.

Surfing, on a global scale, is a multibillion dollar industry which includes the manufacturing and retail of both soft and hard goods (clothing and equipment), media publications, rentals and instruction, camps, contests, and surf-parks. The act of surfing, however, does not have an explicit value attached and trying to measure the actual value of the activity can be difficult, as is trying to measure the impact it makes on coastal economies. Combining economic impacts with measurements of the participant’s value of the activity is the only way to calculate a true estimate for value of surfing. Scattered research has been done trying to place a value on specific aspects of surfing such as the impact of a contest, an artificial surf reef, and even natural surf breaks themselves, but to date no overall framework has been developed to calculate the economic impact of surfing on coastal communities. This economic tool is necessary for surfing to be seen as a viable part of coastal economies and its impact considered in any development plans.

Mundaka is a perfect example of how a small rural coastal community can benefit from a well developed surf tourism market. The loss of Mundaka’s prize wave could have serious economic impacts on the village as well as on the surf community. Results here show that the potential economic impact, or loss to the region, could range from one million to more than four million dollars in total effects. As Table 7 shows, at a visitation level of thirty-thousand the total economic impacts for expenditures is potentially more than three million dollars ($3,000,000) and the personal income effects at this level are potentially more than a million dollars ($1,000,000). Even at the lower visitation levels the economic impacts are quite large for this small rural area with an estimated population of nineteen-hundred people. At ten-thousand visitors the total economic impacts for expenditures are potentially more than one-million dollars ($1,000,000) and the total personal income effects are close to four-hundred-thousand dollars ($400,000). These numbers and impacts are considered low-end estimates due to the conservative tourism multipliers used for this study. Also, access to a larger sample size that includes visitor to the Billabong Pro Contest may increase the results.

Personal interviews conducted with local businesses showed that the importance of surfing to the local economy is not fully realized and that only those individuals that benefit directly saw surfing and the wave as a fundamental part of the Mundaka tourism industry. Those businesses more involved with the local surf culture estimated a potential 50% loss in business if the wave was permanently degraded or the Billabong Pro contests was no longer held there. Overall, surfing was considered important to local tourism.

This study clearly shows that the economic impact of surf tourism at any visitation level on the local economy of Mundaka, Spain is quite substantial and should be considered in any local market, coastal development, and cultural issues. These results may be enough to engage the local government in a discussion about the value and economic importance of surfing to the town and earn the local surf market a stakeholder seat at any debate. Knowing the value of a potential or existing market can be a powerful tool in developing and maintaining the surf market and culture for the town.

To truly have an understanding of the value of this recreational resource to the region it is recommended that further research be done on the personal and cultural values of the wave and surfing to the town and visitors. In addition, it is recommended that an economic impact and possibly a travel cost study be run on the Billabong Pro contest to fully understand its impacts and value to the local area.

For surfing and surf tourism to really be considered an important tourism activity, increased research into the economic, personal and cultural value must be done. Better data needs to be gathered by the industry and governments, and surfing should be considered part of the growing eco and nature based tourism markets. Without further research into the true value of surfing, many important economic and cultural sites could be lost.