Using a beach survey of surfers in San Miguel, Ensenada, we were able to quantify that an average tourist spends approximately $111 US dollars a day. As the average surfer spends 10 days per year in the area, it is calculated that a visiting surfer spends $1,151 US dollars a year in Ensenada.

These figures show that surfing helps drive the local economy of Ensenada and that decision-makers must take into account the importance of the surf zone in terms of coastal management. 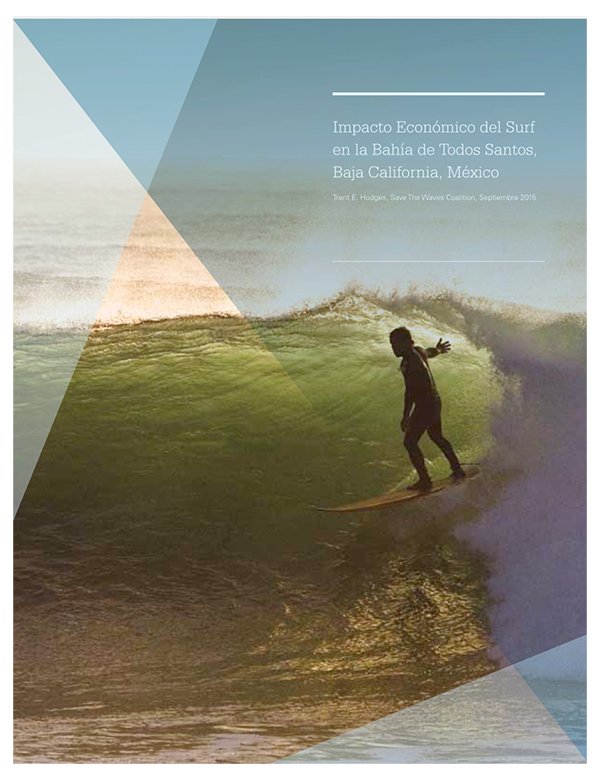 The most famous wave in the World Surfing Reserve and the wave most visited by tourist surfers is San Miguel. The “Surfer’s Guide to Baja” calls San Miguel one of the best and most con- sistent waves in Baja California (Parise 2004). A seasonal river or “arroyo” produces the necessary sand transport and hydraulic shaping to create the classic wave. This unique4 geomorphology of the river is the direct cause of the high quality wave at San Miguel (Puig et al, 2011).

In an effort to preserve this watershed, the local non-governmental organization Pronatura Noreste and Save The Waves have been campaigning for the designation of Baja California’s first State Park from the mouth of the San Miguel watershed 6 kilometers upriver. This study is intended to support the efforts of Pronatura and Save The Waves by providing the economic justification for the conservation of the last pristine watershed in the Bay of Todos Santos.

To quantify the economic impact of surfing on the economy of Ensenada, Baja California, two different surveys were completed in order to extract information on direct expenditures related to surfing. The first survey was intended for tourist or traveling surfers and took place at the wave of San Miguel while the second survey was intended for local surfers in Ensenada. The foreign surfer survey component was conducted during two different periods.

The first from July to August while the second period lasted from October through December. This survey was completed in person at the break of San Miguel. The survey for local surfers began in September and concluded in late February. This survey was conducted online. From the tourist surfer’s survey, it was found that the average daily expenditure is approximately $111 US dollars. From this compiled data and an estimated visitation range, the economic impact of tourist surfers at San Miguel could be between $111,000 and $334,000 a year. The locals survey found that the average surfer spends about $1,270 US dollars a year on surf-related expenses. Using a base estimate of 500 local surfers in the city of Ensenada, surfing represents $635,000 US dollars annually.

Together, local surfers from Ensenada and tourist surfers could have an annual economic impact between $746,000 and $969,000 US dollars. These results confirm that surfing is an important facet of the local economy. In order for the surf economy to grow and prosper however, coastal protection must be prioritiezed so that surfers continue to visit Ensenada. Specifically, these results confirm the importance of the San Miguel State Park initiative that aims to preserve Baja California’s last pristine watershed for the conservation of habitat, the enjoy- ment of the community, and the growth of the local economy. 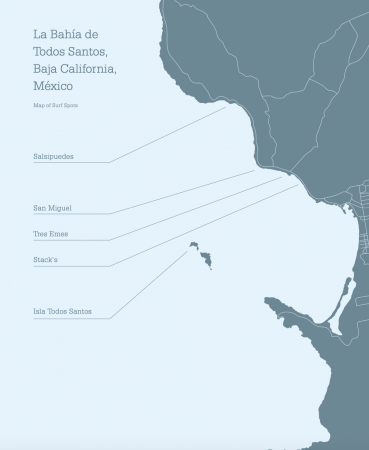 Using a beach survey of surfers in San Miguel, Ensenada, we were able to quantify that an average tourist spends approximately $111 US dollars a day. As the average surfer spends 10 days per year in the area, it is calculated that a visiting surfer spends $1,151 US dollars a year in Ensenada. Using an online survey for local surfers, we were able to determine that they spend approximately $1,270 US dollars a year on surf related expenses.

These figures show that surfing helps drive the local economy of Ensenada and that decision-makers must take into account the importance of the surf zone in terms of coastal management. Environmental threats such as port development, river alteration and sand mining, water quality, and others are common concerns of local and visiting surfers. The results show that if these threats were to occur or get worse, it would discourage the visitation rate. This suggests that conservation of the coast will ensure a sustainable and growing surf economy.

The results show that the San Miguel State Park initiative is broadly supported by locals and tourists and is an effective means of addressing the key environmental threats voiced by surfers. With the economic impact of surfing in Ensenada dependent on the health of the coastal environment, the San Miguel State Park initiative could bolster the protection of the natural resources enjoyed by the public while ensuring that the dollars spent by surfers stay in the community.