Soraya Simi is an ocean-minded filmmaker and environmentalist living and studying in Los Angeles, California. Her film, Waves for Water – Puerto Rico, features as part of the 2018 Save The Waves Film Festival tour. Soraya is a big supporter of Save The Waves and all things environmental, and we caught up with her to chat about her film and her love of the ocean.

How did you discover your love for the ocean, photography, and filmmaking?

I grew up with my twin brother in Tucson, Arizona. From an early age we were always outdoors, either skiing, hiking or doing something exciting and therefore the environment has always been important to me.

While growing up in Tucson, I would spend my summers in LA and the West Coast became a second home to me. I loved being by the ocean and I was always so excited when we got to go on vacation by the sea; it wasn’t a vacation unless we were by the sea!

The school that I attended was heavily focused on STEM academia and by 14, I realized that I was more interested in arts and photography rather than STEM. When I spoke with the school and they understood how important is was to have an arts program, they started a new photography program and that’s where my I began to hone my skills as a photographer.

Once I heard there were programs at college for filmmaking, that’s when I knew what I wanted to do! I even persuaded the school to let me run a filmmaking class for younger students and that experience along with photography planted the seed of using film and photography as a vehicle to communicate.

I’m now in my last year at USC and I’m looking forward to what’s next.

What inspired you to make your film, Waves for Water?

I find it fascinating how people are resilient and adapt to change. In the environment that we are in, there are certain factors that have changed and we’re not able to reverse that; I’m curious to see how we, as a population are going to adapt to those changes.

When I heard about Waves for Water, I was so amazed that such a simple, inexpensive devise could change peoples’ lives and help people adapt, especially after disasters, such as the hurricane in Puerto Rico.

It’s amazing that just one filter costing only $35, could remove all the dirt and bacteria in the water and give people clean drinking water that would save their lives.

I felt it was a story I needed to tell and couldn’t ignore.

How did you hear about Save The Waves?

I was working as an intern at Farm League and we got a late call to say that Save The Waves needed someone to help with audio on a film shoot for the Ensenada clean up as part of the World Surf Reserve project. The next day I was picked up by the STW crew and we headed down to Ensenada; it was great to get to know them on the trip down and learn about Save The Waves, what they did and about the app they had created.

They are part of an awesome community and I’m so happy that I got introduced to them and the work that they do.

This was also when I met Otto Flores and learned about the Waves for Water Puerto Rico project.

What is it that you love about STW?

I have many reasons why I love STW, but the biggest reason is because they actually do something and they make an impact with what they do. When I first heard about STW, I was told that they run Film Festivals, but they are so much more than that; every member of the crew at STW gets involved. They are on site at the World Surfing Reserves, cleaning the beaches, getting covered in fiberglass and the end result is a long term preservation site that is protected.

In everything that STW does, they consider the bigger picture. It’s not about celebrity names or sponsorship; their focus is preserving surf zones and the surrounding environment and will do what it takes to make that happen. 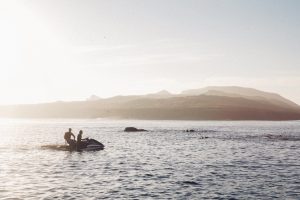 What message do you want people to take home from your work?

The biggest thing for me is people taking responsibility for their own actions. The current environmental situation is the consequence of a lot of things; people and corporations over many years making bad decisions, and it cannot be solved by one person alone.

But, the small changes that we can make ourselves add up and do make a difference and I want to help people understand why it’s important that we stop making excuses and create change.

I also believe that it’s impossible for people to make change unless they love something, and you’re not able to love something unless you know about it. Part of my passion is to help educate people about the environment so they can understand the consequence if we don’t take action.

What’s next for you?

Currently I’m editing a feature documentary about my journey sailing for 40 days in the Caribbean Sea with 19 other undergrad shipmates earlier this year. We visited six countries, conducted ocean and climate change research, and pushed ourselves far out of our usual comfort zones. The film is about the transformative experience we all went through. I’m looking forward to sharing that soon.

PrevPreviousSave The Waves to host the “Dirty Wave Challenge”
NextSave The Waves says farewell to Nick Mucha, Director of ProgramsNext
Sign Up For Our Newsletter