Sign the petition demanding the government of Mexico say NO to deep sea Phosphate mining near Scorpion Bay.

[media-credit name=”The fate of Scorpion Bay and the surrounding coast of the Gulf of Ulloa hangs in the balance despite convincing local turnout for the public hearing regarding deep sea phosphate mining held by SEMARNAT on November 5, 2014.” align=”aligncenter” width=”730″] 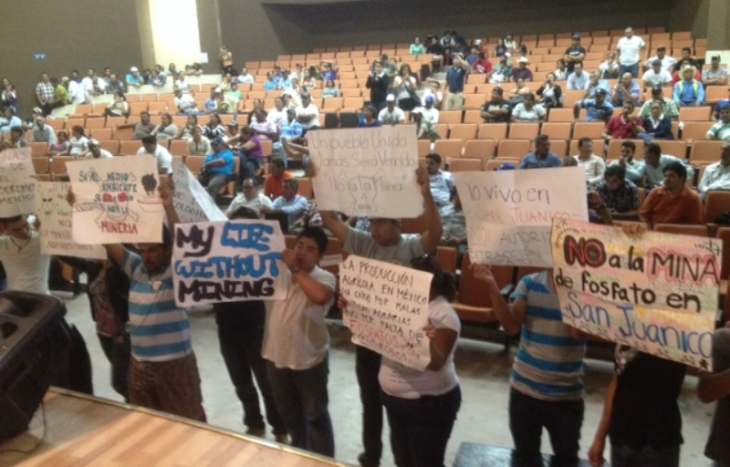 After a suspicious last minute date and location change, which placed the meeting in the middle of the day on a work week, in a small and distant city, the long awaited public consultation for the potentially disastrous “Oceanica” deep ocean phosphate mining project called “Don Diego” took place on November 5th, 2014.  Despite recent catastrophic damage to the Baja Sur coast from Hurricane Marie, nearly 400 courageous local people and many NGOs attended the public hearing to oppose this project.  Also in attendance as part of the opposition were local politicians opposed to the project as well as journalists from around Mexico.

The mining company, “Oceanica” with US based partner “Odyssey Marine Exploration”, unveiled their plans to operate Boskalis dredge ships 24/7, 365, for the next 50 years to remove over 350 million tons of phosphatic sands from the bay and process it into phosphate fertilizer.  Despite the unprecedented nature and scale of the project, and multiple identical projects worldwide having been shot down already, Oceanica claimed zero environmental impact and told local people not to worry.

Furthermore, the company responsible for performing the EIS for the project is QV Gestíon Ambiental, QV Environmental Management, under the direction of Martín de la Cruz Quijano.  Quijano is an ex-SEMARNAT functionary from SEMARNAT’s Environmental Impact and Risk Division.  During his tenure with SEMARNAT, Quijano worked for the controversial director Ricardo Juarez who was investigated by the Ministry of Public Service and removed from office by the government of Felipe Calderón.

Despite the claims of zero impact by project proponents and beneficiaries, local scientists, researchers and fisherman remain unconvinced and very concerned.  The local opposition highlighted some of the many risks of the project, including the potential for dredging to leach cancerous mercury, uranium and lead into the local waters and ecosystem. Other concerns included large sediment plumes from phosphate dredging creating anoxic ocean ‘dead zones’, noise pollution from the project disturbing the area’s sensitive whale breeding grounds and migration patterns, and the economic impact on local fishermen if local fisheries are negatively effected.

[media-credit name=”The proposed project seeks permission to dredge the ocean bottom for phosphatic sands, 24/7, 365 days a year, for 50 years. Despite the unprecedented and controversial nature of the project, not to mention lack of a sufficient enviromental impact study, the project may still be permitted by the Mexican government.” align=”aligncenter” width=”539″]

Shockingly, it was also shown that the entire project is expected to create only 80 jobs over 50 years, with many of those jobs presumably given to foreigners with the technical training needed to operate the dredge ships.  Further insulting the local community, representatives from Odyssey and Oceanica left immediately after their presentations and choosing not to respond to questions from the public, leaving just two people without specific knowledge of the project operations or impact to respond to nearly 400 attendees.

“Oceanica” is currently waiting for permit approval, with response expected by the end of the 2014 calendar year.  Opposition to this project is crucial not just for Scorpion Bay surfers and local Mexicans but because it will set precedent for all future proposed Ocean Mining projects globally.  Mining companies have discovered enormous mineral deposits along coast lines worldwide and this issue is sure to become more pressing in coming years.

Please voice your concern, call Odyssey Marine, call their financing partner JP Morgan (contacts listed below), tell your friends and please sign the following petition to show Mexican Government officials there is support for a sustainable future not based on conducting an unproven science experiment with the environment for short term profit.

The public meeting and review of the “Don Diego” submarine Phosphate mining project led by SEMARNAT will be held on Wednesday, November 5th, 2014 in the city of Constitucíon at 8am.  The location will be Auditorio Ricardo Chato Covarruvias Villasenor located at Av. Madero esquina con Zaragoza.

Registration for the meeting will begin at 8am, all attendees are encouraged to arrive at that time to sign in and take their place in the meeting room.  The public hearing will commence at 9am.

The communities of San Carlos, Lopez Mateos, Abreojos, Las Barrancas, and San Juanico all plan to attend the November 5th, meeting at 8am.  Anyone able to attend the meeting is encouraged to do so.  These communities are located around the coast of Magdalena Bay and all contain fishing cooperatives who will be heavily impacted by this unprecedented project.  Additionally, numerous NGO’s are committed to opposing this project, which will have real drastic impacts on one of the world’s greatest biodiversity hotspots if approved.

Recently, the government of Baja Sur has spoken out publicly against this project, click here to view that news.  While this news is good, it bears qualification.  A project of this size is submitted directly to Mexico City, bypassing local government.  While it is encouraging to know that the Baja Sur government is against the project, the power now lies in the hands of SEMARNAT.  It is within their power to reject or approve the application for permits to mine Phosphate from the sea floor.

If approved by SEMARNAT, Exploraciones Oceánicas, S. de R. L. de C.V. will be granted a permit to mine phosphate from the sea floor 12 miles offshore of the nearest land at Magdalena Bay.  For 50 years.  24 hours a day, 365 days a year.

Notable efforts have been made by local citizens and NGO workers to stop this project.  Wednesday they will have a chance to ask questions of the project spokesperson with SEMARNAT leaders present.  Please check back to savethewaves.org for news of this important meeting.

A deep ocean phosphate mining project has been proposed for the waters offshore of Scorpion Bay in Baja Sur, Mexico.  The grand scope of the project would have grave impacts to the ocean ecosystems located right next to some of Baja’s most seductive points.

Exploraciones Oceánicas, S. de R. L. de C.V. has submitted its Environmental Impact Study (EIS) for the project called “Don Diego.”  The mining permits allow for phosphate exploration off the coast of Mexico in the Bahía de Ulloa, between Abreojos and San Lázaro.  Phosphate is exploited for its value as an agricultural ammendment and is used in large scale applications in the USA and around the world.  The project proposes using marine dredges to a) dredge phosphatic sand from the ocean floor and b) prepare it for transport using a desalination barge.  The work area is located 12 miles from the nearest point to the coast and adjacent to the fishing area called San Juanico.  If allowed, the scope of work entails dredge operation 24 hours a day, 365 days a year, for 50 years.

Authorities close to the project claim that their EIS has been vetted and approved by multiple NGO’s in Mexico, although none have been found yet who can verify this claim.  The proposed mining site is located in an area of ocean long studied by scientists for the abundance of marine mammals that inhabit the area.  It holds no less than 5 species of sea turtle, all listed as endangered on the IUCN red list of threatened species, as well as the Red Crabs, the main food source for Olive Ridley and Loggerhead turtles. The region is also considered a hot spot for Black Marlin, Swordfish, and Blue Whales.

[media-credit name=”Researches have been studying the health and mortality rates of sea turtles in this area due to industry for years. 2 of the 5 species of turtle found here are listed as endangered on the IUCN red list of Threatened species. Adding more threats to their already questionable future cannot aid in our ability to understand or protect their long term health.” ]] 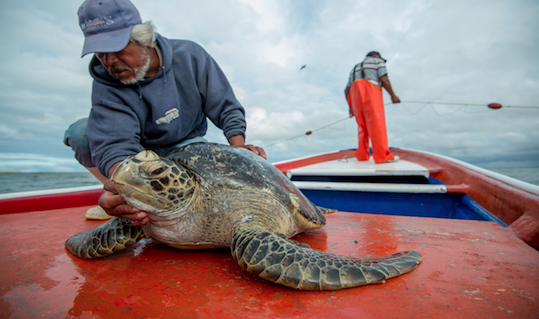 What Can You Do?

José Carlos Cota Osuna, delegate for the Secretariat of Environment and Natural Resources (SEMARNAT) has stated that a public information meeting for the Don Diego marine mining project, will be held on November 5th in the auditorium of the Valley of Santo Domingo Local Agricultural Association, in the city of Constitucion.  This meeting was previously scheduled for the 31st of October, but was unexpectedly changed.  Unfortunately, this practice is common and those interested in opposing the project are advised to stay aware and ready for news of this meeting as it could be changed yet again.

Any and all guests are welcome, tourists, locals, and part time residents without discrimination.  Both vocal and written comment will be heard and accepted.  Anyone able to attend the meeting is strongly encouraged to go and take their neighbors with them.  The governmental body, SEMARNAT, who decides whether this project is approved or delayed/cancelled will be present. Written comment must be submitted with technical documentation supporting all project scope objections.

Odyssey Marine Exploration, a US based company behind the project, has engaged J.P. Morgan as its financial advisor to help it evaluate options to best maximize the value of the project including alternatives for financing the project, potential partnerships or other strategic options.  Two contacts with JP Morgan in charge of partnering and funding for this project are listed below:

-Jeffrey Price, Managing Director of their Chemical and Fertilizers Group in New York

To contact them, call 212-270-6000 and ask for them by name, the operator will connect you and you will most likely have to leave a message.  When speaking to them on the phone or leaving messages, reference the Don Diego Phosphate Mining project in Bahía Ulloa in Baja Sur.  Please do not threation or insult these individuals or JP Morgan.  Simply leave a message stating why this ill conceived project is a risk to the reputation of JP Morgan and their supporters.

What Is Really At Risk?

The threat of this project goes well beyond the waves of Scorpion Bay.  Projects of this nature and scope are few and far between for comparison.  Two similar projects that were previously proposed in New Zealand and Namibia were met with public outcry.  The environmental impacts are not completely understood and thus present significant reason for caution and concern if the project is granted. Whales, turtles, and benthic and pelagic flora and fauna all face real risks to their health, as do the industries they support like tourism and fishing.

While the waves of Scorpion Bay could be negatively affected by changes in water quality and sand flow, the threats to species biodiversity, foraging habitat, and fishing industry are just as real and grave. The livelihood of coastal communities along the Baja Sur coast depend on these eco-systems for survival, as do the international fisheries industries of Mexico.

Save The Waves will continue to monitor this situation and provide avenues for action as soon as they become available.