Save The Waves Coalition partnered with Federal University of Santa Catarina Surf and Sustainability Research Group (SandS) who directed the research and ran the study. Findings of the Surfonomics study shows that surf tourists and their travel partners account for approximately 44% of the tourists visiting Guarda do Embaú and surf tourism generally contributes approximately $4 million dollars annually to the local economy. Surfers on average spend twice as much as tourists and are responsible for around 77% of the tourism contribution to the local economy. 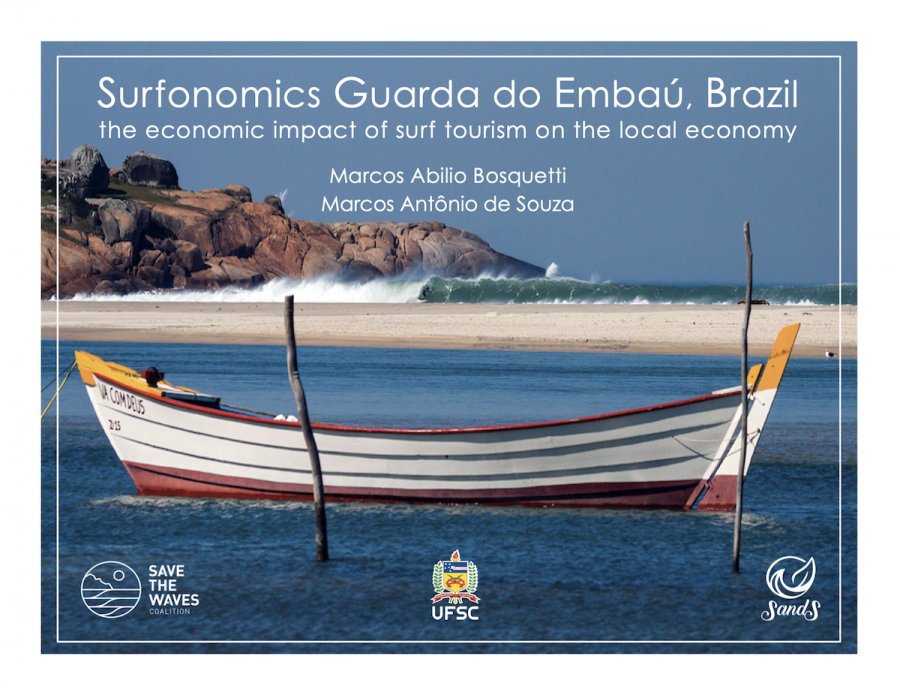 Guarda do Embaú is home to a legendary wave that breaks at the Da Madre River mouth throughout the year. For generations Guarda do Embaú was just a small, sleepy fishing village. In the 1970s, surfers discovered Guarda’s epic waves and it is now internationally recognized as one of the best surf spots in Brazil. World-class waves have an enormous social and economic value that may be underestimated by political leaders.

As over-development, absence of an adequate sewage sanitation system, and agricultural pesticides found in Da Madre River threaten the surfing and coastal resources at Guarda do Embaú, understanding the benefits of this world-class surf spot to the local economy is essential in guiding policy makers in the right long-term direction. This empirical study attempts to estimate the direct contribution of surf tourism to the local economy of Guarda do Embaú.

All primary data was collected throughout 2018 at Guarda do Embaú through individual face-to-face survey interviews conducted with 368 surfer tourists and 20 managers of local hotels. Data was analyzed using descriptive statistics to present the findings of this quantitative research. Other studies were used in the discussion of results to widen the understanding of the present empirical study.

To our knowledge, this is the first Surfonomics study conducted in Brazil and we hope that its findings can help decision makers make better choices to preserve the surf resources in Guarda do Embaú for future generations. Considering that Brazil has a fast growing surfing population (Bosquetti, Fiates & Ponting, 2017) and a great concentration of surf breaks (McGregor & Wills, 2017), we hope that this study can inspire future research in Brazil and the creation of a national database on surf tourism.

Findings of the Surfonomics study and Santur study over the summer, which is the peak season for tourism, shows that surf tourists and their travel partners account for approximately 44% of the tourists visiting Guarda do Embaú, but they spend on average twice as much as tourists in general and are responsible for around 77% of the tourism contribution to the local economy, leading to the conclusion that surf tourism plays a substantial role in the economy of Guarda do Embaú.

We recommend downloading and reading the official report for the Surfonomics study, linked above, which review and discuss the following: