#NatureTrumpsWalls was launched in 2016 with multiple local partners to defeat a proposal for a 2.8 kilometers, 15 feet tall, 200K ton seawall. This project was proposed by Trump International Golf Links to protect its golf course from climate change and sea level rise. Since then, Save The Waves has worked to confront and challenge multiple proposals, all of which threaten to destroy the Carrowmore Sand Dunes and Doughmore Beach.

Friends of the Irish Environment

Friends of the Earth

After more than four years of campaigning and fighting to save beloved Doughmore Beach in Ireland, the #NatureTrumpsWalls campaign and coalition has succeeded in stopping the construction of major seawalls that would have led to catastrophic impacts to the coast. Learn more.

PETITION PRESENTED TO TRUMP AT DOONBEG

A petition containing over 104,000 signatures opposing the construction of a sea wall by USA President Donald Trump at his golf course in Ireland is attempted to be presented to him when he arrived on Wednesday, June 5th, 2019. Unable to directly pass on the petition, the opposition statement was given to TIGL.

CALL UPON IRISH AUTHORITIES TO REVIEW AND REPEAL

A year later, the case is still left undecided. Save The Waves urges Ireland’s national planning appeal board to finally hear the case against TIGL’s seawall – requesting careful consideration and understanding for the severe implications.

SAVE THE WAVES APPEALS COUNCIL DECISION

Save the Waves and partners have each filed separate appeals to Ireland’s national planning appeal board, An Bord Pleanála. The four page appeal by Save The Waves outlines the myriad technical and procedural issues presented with Trump International Golf Links’ (TIGL) proposal and subsequent RFI documents.

The Clare County Planning Department issued an 8-page ‘Request For Further Information’ (RFI) that outlines myriad concerns with the proposal after reviewing the technical files and weighing public comments. TIGL is given six months to respond.

Save The Waves Mounts a second opposition campaign

We submit over 700 letters of objection collected from our community and supporters, representing global constituency of opposition. We lodge a formal objection with the Clare County Planning Department highlighting our key concerns with the newest proposal.

While the new proposal is significantly scaled back from the original proposal, it includes two walls totaling over 850 meters in length and represents a very short-sighted erosion control defense. While scaled back, the proposal represents yet another futile attempt to impede natural coastal processes and that the effects of the intervention will cause significant unintended and grave consequences at Doughmore Beach including accelerated erosion at adjacent spots along Doughmore Bay, significant beach narrowing and steepening, and potential beach loss.

The new proposal is reviewed by the Clare County Planning Department and they begin accepting letters of objection.

After more than four years, the #NatureTrumpsWalls campaign has finally stopped the construction of a major sea wall from destroying Doughmore Beach.

STOP TRUMP’S IRISH WALL CAMPAIGN: PETITION TO BE PRESENTED TO TRUMP AT DOONBEG

A petition containing over 104,000 signatures opposing the construction of a sea wall by USA President Donald Trump at his golf course in Ireland is to be presented to him when he arrives on Wednesday, June 5th.

Save The Waves Coalition and environmental partners urge careful consideration from Ireland’s national planning appeal board in the case against Trump International Golf Links’ seawall in Doonbeg, Clare County. 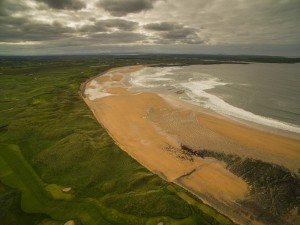 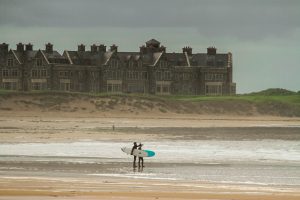 Last week, Save The Waves submitted a formal objection to the most recent 400+ page proposal document by Trump International Golf Links (TIGL), where they attempted to demonstrate the two seawalls would not disrupt the natural coastal dynamics at Doughmore Beach.

After 700 objection letters  were submitted by Save The Waves and our coastal scientists to the Clare County Planning Department, Trump International Golf Links’ (TIGL’s) revised seawall proposal at Doughmore Beach, Ireland has been dealt another setback. The Planning Department issued an 8-page ‘Request For Further Information’ (RFI) that outlines myriad concerns with the proposal 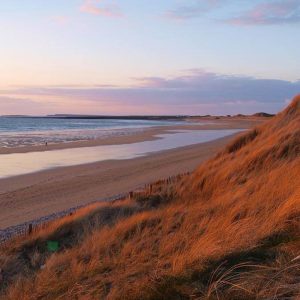 Save The Waves Coalition has again mounted a global resistance to President Trump’s latest attempt to build a series of unnecessary seawalls in Western Ireland. A week ago we appealed to our community to join the #NatureTrumpsWalls campaign and submit letters of objection during the public comment period on the new proposal and we have

In 2016, then-US Presidential Candidate Donald Trump and his hotel company, Trump International Golf Links (TIGL), sought to build a massively controversial seawall on a public beach to protect his Trump Golf Resort in western Ireland. The proposed wall on Doughmore Beach would run 2.8 kilometers, reach 15 feet tall, and consist of 200,000 tons of rock dumped in a sensitive coastal sand dune system.  Doughmore beach is one of western Irelands most consistent beachbreaks and widely popular with a deep community of surfers and beachgoers. Construction of this seawall will destroy the sand dune habitat, restrict public access, negatively impact the quality of the surfing waves, and ultimately result in beach loss.

Trump’s golf course is built along a picturesque sand dune system known as Carrowmore Dunes; a renowned ecological treasure that has been named a ‘Special Area of Conservation’ by the European Union Special Habitats Directive. In all, 31 acres of pristine sand dunes are legally protected and the system provides a unique habitat for the rare prehistoric snail, vertigo anguistor. The sand dunes play a critically important role for Doughmore Beach as they contribute the sand supply for the wide, popular beach and create the offshore sandbars that make Doughmore Beach a consistently fun surf spot.

Sand dune systems are, by definition, dynamic. They constantly shift, grow, blow out, and regenerate. Prevailing onshore winds blow sand from the beach inland where it gets trapped by coastal grasses and vegetation. Offshore winds blow the sands back down to replenish the beach and further offshore to create sandbars in the ocean. It is a continuous cycle that depends upon strong winds and open coastline. Building a 2.8 km, 15 foot tall seawall at the foot of the sand dunes will unquestionably disrupt the natural process and lead to the dunes’ demise. Over time this will starve the beach of needed sand, negatively impact the surf quality, and ultimately lead to the disappearance of the popular public beach.

Trump sought special permission from the Irish national government for the wall in March but was rejected in April. The local Clare County Council is now the responsible agency deciding the fate of Doughberg Beach. They have reviewed Trump’s permit application and Environmental Impact Statement and have sent a Request for Further Information outlining 51 specific points that they want resolved or clarified. Trump has until December 2016 to submit the requested information. At that point, the Clare County Council will make a decision. All sides expect any council decision to be appealed, a process that will last several months more.

Save The Waves continues to work alongside prominent Irish and European environmental and surfing groups to defeat Mr. Trump’s proposal. The coalition of organizations includes Surfrider Foundation Europe, Friends of The Irish Environment, Irish Surfing Association, West Coast Surf Club, Friends of The Earth Ireland, and the Irish Seal Sanctuary.